and to share a tantalising extract from the book

Following hot on the success No. 1 Kindle bestsellers THE TEACHER and THE SECRET, the queen of grip-lit is back. Katerina Diamond has proved herself to be a hugely powerful new voice in the psychological crime thriller genre, and this book does not disappoint. Focussing on the prison system, it is gritty and compelling – filled with characters that will keep you guessing until the very end.

When a burned body is found in a disused signal box, suspicion falls on lonely teenager Gabriel Webb. There’s no doubt he was at the scene of the crime, but does he deserve what awaits him in prison?

DS Imogen Grey is certain there’s more to the case than meets the eye. But while she struggles to convince those around her of the truth, her partner DS Adrian Miles is distracted by his own demons.

When a brutal double murder is reported, their investigation is stopped in its tracks. Is the body in the box even who they thought it was? The duo realise Gabriel might have been locked up for a crime he didn’t commit. But with enemies watching Gabriel’s every move, they may be too late.

Miles and Grey are back in the thrilling new novel from bestselling author Katerina Diamond, perfect for fans of Karin Slaughter and M.J. Arlidge, Orange Is The New Black and Locked Up.

Trey dropped a few rocks of crack into the pipe and sucked in a couple of deep breaths as though he were about to dive into the sea before putting his lips to the edge of the pipe. He held the lighter under the glass bowl and gently rolled the glass stem in his fingers as he slowly drew the milky smoke into his lungs. His expression changed and he sat back in his chair. Chris took the pipe from him. Gabriel noticed that Leanne was watching Emma the whole time, obviously trying to gauge her reaction to this, to see if she was open to it. He saw her shiver again.

‘We should go. It’s freezing in here,’ Gabriel said, stepping closer to his girlfriend. The sun was going down and he didn’t fancy crossing the tracks in the dark, plus he really didn’t want to be here with these people any longer.

‘It’s OK. We’ll go in a bit.’ Emma smiled at Gabriel. He noticed how people were different with each other; Emma behaved differently when they were alone, she behaved differently with her family too and she was definitely behaving differently here with Leanne. This behaviour didn’t feel like her, it was a side he hadn’t seen before. A tapping sound echoed against the window as the rain began.

‘It’s starting to chuck it down,’ Gabriel said, looking at Emma hopefully, trying to impart to her his strong desire to leave. She just shifted her gaze away.

‘Why don’t you see if you can warm it up in here?’ Leanne asked him, it was a challenge, a threat maybe; there was something about her that made Gabriel really uneasy and it seemed amplified in here.

Gabriel went to the corner and grabbed the metal waste paper bin that had been left in the signal box. He didn’t want to cause a fuss; maybe his argument with his father earlier had made him extra defensive, maybe he wasn’t thinking straight. He collected some of the rubbish from the floor and piled it in before picking up one of Trey’s lighters from the table and snapping the head off.

Katerina Diamond lives on the east Kent Coast with her son and daughter. Born in Weston-super-Mare, she has lived in various places since including Greece, Cyprus, Derby, East London and Exeter. Her first novel reached number six in the Sunday Times Bestseller chart. 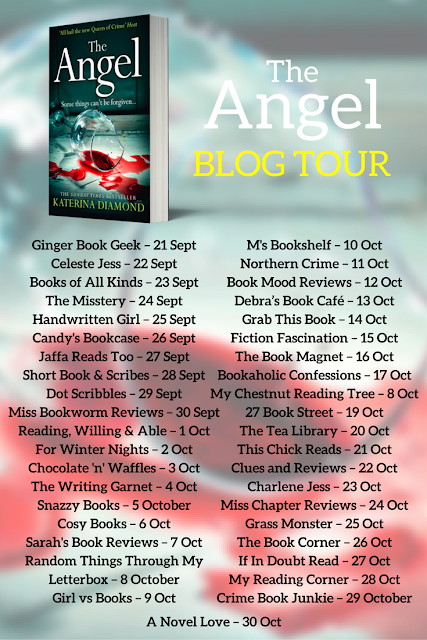 My thanks to the author and Sabah at Harper Collins for the invitation to be part of this blog tour and also for their kind permission to share this extract.