Jaffareadstoo is delighted to host today's  stop on the

Two girls go missing, decades apart. What would you do if one was your daughter?

When eight-year-old Grace goes missing from a sweetshop on the way home from school, her mother Emma is plunged into a nightmare. Her family rallies around, but as the police hunt begins, cracks begin to emerge.

What are the secret emails sent between Emma’s husband and her sister? Why does her mother take so long to join the search? And is Emma really as innocent as she seems?

Meanwhile, ageing widow Maggie Taylor sees Grace’s picture in the newspaper. It’s a photograph that jolts her from the pain of her existence into a spiralling obsession with another girl – the first girl who disappeared…

This is a gripping psychological thriller with a killer twist that will take your breath away.

I am delighted to introduce the author, Elisabeth Carpenter to Jaffareadstoo to tell us all about her debut novel.. 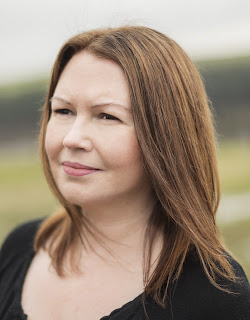 Welcome to Jaffareadstoo, Elisabeth. Where did you get the first flash of inspiration for 99 Red Balloons?

A missing child is every parent’s worst nightmare. I wanted to explore the impact it might have on the lives of the wider family unit. I hope I’ve treated this subject with respect as it’s so emotive and horrific.

Without giving too much away – tell us three interesting facts about the story which will pique the reader's interest.

I’ve added the point of view of the child who goes missing, as I’ve not read many books on this subject that do that.

I’ve tried to combine pace with characterisation to, hopefully, make the characters come alive in the mind of the reader.

Part of the book is set on an RAF base in Germany. I lived there when I was a child (many, many years ago!).

It takes a few months to get to know my characters, so by the time I’ve gone back to the beginning of the completed first draft, I have to take out things they wouldn’t do or say.

Sometimes the plot will emerge organically, giving the cast a situation that they must deal with, but I always have an ending in mind, which is fluid and often subject to change.

I love the start of a book when literally anything can happen. I try not to get too bogged down with what I had planned – if I’m bored with what I write, it’ll be boring to read. If I ever reach the stage of writing for the sake of it, I close the laptop and read, or watch a box set. I’ll be five minutes in and an idea will pop into my mind.

Do you write the type of books you like to read and which authors influenced you?

I’ve read and really enjoyed some of the psychological thrillers that were published recently. I was totally blindsided by the twist in Gone Girl. I also enjoy novels that have a light science fiction element to them, such as The Time Traveller’s Wife and The First Fifteen Lives of Harry August. These books have influenced me greatly, as they go quite deep into characterisation, which is what I’ve tried to do in 99 Red Balloons.

I love Sally Wainwright’s work. Happy Valley is genius, and I thought Last Tango in Halifax had excellent characterisation, humour and warmth.

99 Red Balloons is a great book title - if your life was a book, what would be its title?

Anna’s mother, Debbie, was last seen on holiday in Spain when Anna was just a baby. Thirty years later, the family receives an email from someone claiming to be Debbie.

The narrative follows Anna in her search for her mother, and Debbie in 1986 during the days leading to her disappearance.

Elisabeth Carpenter lives in Preston with her family and has been awarded a Northern Writers' Award bursary from New Writing North, and she was long-listed for the Yeovil Literary Prize (2015) and the MsLexia Women’s Novel award (2015). Two of Libby’s flash fiction pieces were shortlisted on Mashstories.com – where she is now part of the judging team. 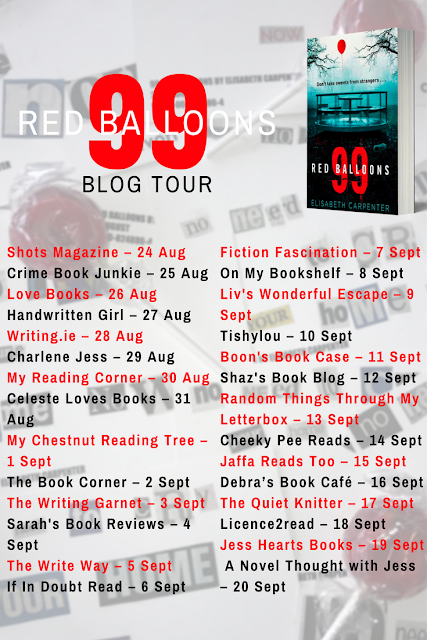 My thanks to Elisabeth for sharing her work with me and for answering my questions about
99 Red Balloons.

My thoughts about 99 Red Balloons..


When Emma’s eight year old daughter, Grace goes missing, the investigation into her disappearance opens up family secrets which have been buried for far too long. The story, told by multiple narrators, really gets into the heart of the mystery surrounding the abduction, but as time goes on, it becomes obvious that there are more questions than there are answers.

I really enjoyed getting to grips with this clever psychological suspense story which focuses on the dark and deadly secrets which are so often at the centre of a family disaster, and as more and more pieces of the jigsaw puzzle start to fit together we are given a unique insight into certain events which happened a long time ago. There's always something really disturbing about reading a story about a missing child and I thought that the author showed the emotional vulnerability of Emma's family really well and conveyed their defenselessness and also their inherent weaknesses as a family unit. That there are some dark family secrets to be revealed becomes obvious as the story progresses and it’s really interesting to see how the author allows these secrets to be exposed at their own pace without revealing too much, too soon.

When reviewing psychological suspense stories I am always conscious of not revealing very much as to say more would be to divulge far too much of the plot, and, believe me, this really is one of those stories which you need to read with an open mind. The mystery at the heart of the story is well handled and there are more than enough surprises in between to keep you guessing right up to end.

As a debut novel 99 Red Balloons works on several levels. There is great attention to detail, all the characters are finely drawn and whilst believable, they are not all likeable, with the exception of Maggie, who I thought was particularly interesting. The added inclusion of some psychologically damaged and terrifying individuals adds an interesting touch of menace to, what is, a compelling story-line.

There is no doubt that 99 Red Balloons is an exciting debut novel by an emerging new talent.

Thanks also to Sabah at Harper Collins for her invitation to be part of this blog tour and for my review copy of 99 Red Balloons.