Stepping aboard the Marigold amid pouring rain, there’s lots for Polly to get to grips with. Not least her fellow crew: strong and impetuous Verity, whose bark is worse than her bite, and seasoned skipper Bet.

With her sweetheart away fighting in the RAF and her beloved brother killed in action, there’s plenty of heartache to be healed on the waterway. And as Polly rolls up her sleeves and gets stuck into life on board the narrow boat – making the gruelling journey London up to Birmingham – she will soon discover that a world of new beginnings awaits amid the anguish of the war.

When nineteen year old Polly Holmes leaves her home in bombed out London and joins a female crew of canal boat operatives in October 1943, she is little prepared for the changes that this decision will bring to her life. At first, due to an uncomfortable feud with Verity, a fellow crew member, Polly struggles to become accustomed to life on the canal. But gradually, under the watchful eye of skipper, Bet, the young crew members start to work together as a team and the arduous journey of taking the narrow boat from London to Birmingham is filled with excitement and adventure.

In The Waterway Girls the author brings together a group of feisty young women and describes vividly the hardships and trepidation that accompanied them on their canal journey. Life was tough, not just for the women who were recruited by the Ministry of Transport’s waterways training scheme, but also for the established canal folk who had, for so long, made the canal systems their home. Tensions run high and for Polly, Bet and Verity life on the canal is never without its complications.

Before reading this novel, I was unaware of the WW2 initiative of training women to crew canal boats in order to keep freight and other cargo on the move during the worst of the war years. Rather as the Land Girls kept the agricultural side of things going, so the Waterway Girls ensured that cargo and merchandise travelled safely from depot to destination, often in hazardous conditions.

I think that the author captures time and place really well and combines the descriptions of eventful life on the canals with the personal stories of the crew members. There is heartache a plenty ahead of them, but there is also a sense of hopefulness, as they each become accustomed to a new way of life.

The Waterway Girls is the start of a new saga series by this author and I am sure it will appeal to her many fans. 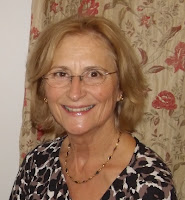 Milly Adams lives in Buckinghamshire with her husband, dog and cat. Her children live nearby. Her grandchildren are fun, and lead her astray. She insists that it is that way round.


Milly Adams is also the author of Above Us The Sky and Sisters At War.

Do visit the other blog tour stops 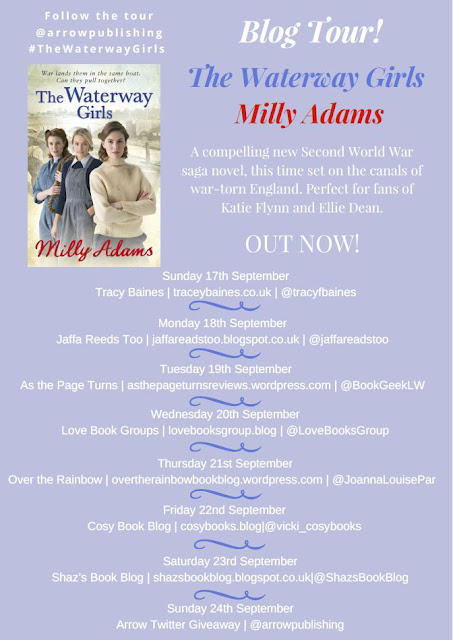 My thanks to Becky at Penguin Random House for the invitation to be part of this blog tour and also for my review copy of The Waterway Girls.