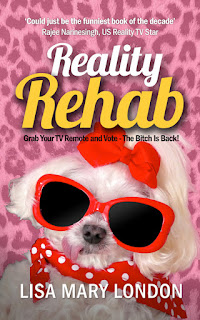 Faded soap star Gloria Grayson swaps banoffee pie for humble pie with a stint on reality TV. But her last ditch bid to salvage her celebrity backfires, when the ex-husband from hell is sprung on her in front of 10 million viewers.

Can Gloria win back A-list status, happy ever after and her Rear of the Year title? Reality is stranger than fiction!

Faded TV star Gloria Grayson has hit rock bottom. Sacked from her starring role in a top soap, divorced from hell-raising actor 'Mad' Tommy Mack, and obese from binge eating, her days as Britain's sexiest blonde are well and truly over.

But her luck changes when cruel paparazzi photos relaunch her career, and she and her fat, feisty dog are booked to appear on TV's Reality Rehab.

Gloria is incarcerated with an American psychotherapist, a rabble of D-list celebrities and umpteen cameras, then put on a starvation diet. But worse is to come, with the shock arrival of her alcoholic ex-husband.

Tears and tantrums ensue as the divorced couple's therapy sessions take over the show, and ratings soar. The other celebrities are infuriated to be sidelined and Reality Rehab fast becomes The Tommy and Glo Show.

But Gloria and Tommy are hiding explosive secrets from each other and 10 million viewers - Reality is stranger than fiction!

I think that Reality Rehab is probably one of the quirkiest stories I've read this year and, if I'm honest, it could so easily have passed me by, as sneaking into the house a book with a dog on the cover, however cute, would have caused Jaffa's tail to twitch. So it's safe to say that reading Reality Rehab under cover on my Kindle didn't cause Jaffa any worrying moments.

Gloria Grayson's unique personality reminded me so much of those faded soap stars who continue long past their sell by date, who always seem to try a little too hard on games shows, or who turn up time after time on late night chat shows, reliving moments of their now faded glory, and dining out on having that long ago affair with a B-listed movie star. I liked Gloria's character from the start and even though I found her to be rather a sad figure, I did feel immense sympathy for her and there is no doubt that her love for her pampered pooch, Baby-Girl,  is both genuine and heartwarming.

The other celebrities who join her in the house are, as we say in the North, a rum bunch but they made me laugh out loud and it's easy to place well known personalities in the same situation. I won't say more, or who they reminded me of, as that would spoil the effect of reading Reality Rehab for yourself. But you'll recognise traits and similarities...

This is a really funny feel good sort of story and is a perfect fit for anyone who has ever watched a reality TV programme and wondered just what on earth was going on behind the scenes. There's some laugh out loud moments but there's also a canny perception into the psyche of celebrity and the whole culture of baring all, figuratively speaking, on national television.

If you're a bit tired of reading angst ridden domestic noir and need a lighter read that still packs a punch then do give Reality Rehab a try, you won't be disappointed!

Lisa Mary London went from Chief Reporter on a sleepy Cotswold newspaper to become Celebrity Producer on some of Britain’s best-loved TV shows.  Her TV credits include An Audience with Ken Dodd, A BAFTA Tribute to Julie Walters, The British Comedy Awards and I’m a Celebrity… Get Me Out of Here! She’s worked with stars from Tony Curtis to Ant and Dec, and her debut novel Reality Rehab features around 200 famous names. 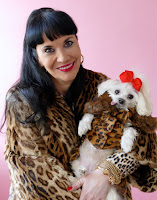 ‘There’s never a dull moment when you’re working with the stars’, says Lisa. ‘One minute you’re sipping champagne with Pierce Brosnan, the next you’re standing in the Ladies’ minding Barbara Windsor’s handbag.’

Reality Rehab is based on her real life, behind-the-screen experiences as a Celebrity Producer. ‘I’ve met many old school stars like my book’s protagonist Gloria, who curse reality TV and think the cast of TOWIE should be stacking shelves at Tesco, not walking the red carpet.

‘She’s a cross between Diana Dors, Boadicea and Miss Piggy, a glorious, garrulous anti-heroine with bags of fattitude - Gloria puts the real in reality TV!’

Gloria’s petulant pooch Baby-Girl is closely based on the book’s cover star, Lisa’s beloved Maltese Dolly-Dog (says Lisa - ‘You couldn’t make her up’).  Dolly-Dog won fame on ITV’s Loose Women when she married Sherrie Hewson’s Westie Charlie, in a ceremony officiated by John Barrowman (available on YouTube).  The couple split acrimoniously and are currently fighting for custody of a chew toy.

A journalist by profession, Lisa has written for the Daily Mail and was briefly a News of the World reporter, but made her excuses and left before anyone was imprisoned for phone hacking.

Donate to Dogs! Mutts with Friends Dog Rescue receives £1 from every paperback sold.

My thanks to Lisa, and of course, Dolly -Dog for my review copy of Reality Rehab