Jaffareadstoo is delighted to be hosting today's stop on the Bluebird, Bluebird Blog Tour 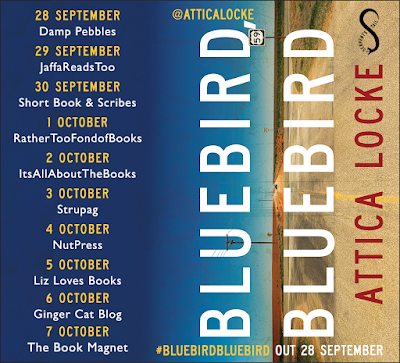 A Conversation with Attica Locke 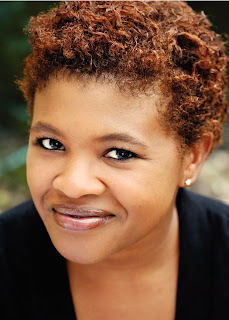 Bluebird, Bluebird is the first in a new series set along Highway 59, Texas. What draws you to this setting?

My whole family – on both my mother’s and father’s side – come from towns along this highway. I grew riding up and down Highway 59 several times a month, visiting relatives in East Texas. In some ways, I think I became a writer on Highway 59. Before iPads and all that technological distraction, my entertainment on long car rides through the country was solely my imagination as I stared out the window. East Texas was a rural fantasia full of towns like Cut and Shoot and Gun Barrel City, lush ranches and poor trailer park cities, all of thread through with bayous and creeks tucked in the piney woods. As a child, I would make up stories about this world.

We are in the most depressing state in my lifetime. The election of Donald Trump revealed an ugliness and a hard-heartedness among white folks who feel resentment about demographic shifts in the country. We’ve always known it was there, but I am so disheartened by the fact that those feelings of resentment would allow so many voters to overlook Donald Trump’s obvious shortcomings as a leader. But he gave a certain segment of the population permission to express publicly feelings that were usually reserved for the privacy of one’s own home. And that was worth more to them than access to adequate health care or having a leader who might not tweet us into WWIII. It’s mind-boggling, the power of racism that still exists in America.

I think they influence each other. Screenwriting helps make my prose very visual (I hope), and it’s a reminder that even though you could explain every thought a character is having, maybe don't. Drama works when the audience has to figure out a character only by their actions and the words they say. I hope being a novelist makes me a more courageous screenwriter, willing to tackle difficult subjects with honesty. And I hope it makes me more descriptive in the ‘action’ lines.

Southern fables usually go the other way around. A white woman is killed or harmed in some way, real or imagined, and then, like the moon follows the sun, a black man ends up dead.

But when it comes to law and order, East Texas plays by its own rules - a fact that Darren Mathews, a black Texas Ranger working the backwoods towns of Highway 59, knows all too well. Deeply ambivalent about his home state, he was the first in his family to get as far away from Texas as he could. Until duty called him home.

So when allegiance to his roots puts his job in jeopardy, he is drawn to a case in the small town of Lark, where two dead bodies washed up in the bayou. First a black lawyer from Chicago and then, three days later, a local white woman, and it's stirred up a hornet's nest of resentment. Darren must solve the crimes - and save himself in the process - before Lark's long-simmering racial fault lines erupt.

Attica Locke is an Orange Prize-shortlisted author and is the writer of the hit TV show Empire. Her previous novel, Pleasantville, was also longlisted for the Baileys two years ago.

My thanks to the author for being my guest today and also to Jess at Profile Books for her invitation to be part of this tour and for my e-copy of Bluebird, Bluebird.

Blog Tour runs until the 7th October. Do visit the other stops for more blog tour content