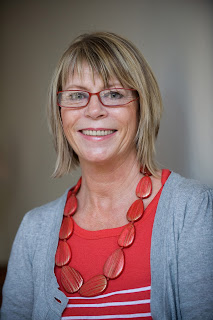 Has Sheryl Browne switched to the dark side?

Hi, Jo and Jaffa. Thank you so much for featuring me on your fabulous blog. I can see you two have been busy bees. I have no idea how you fit it all in!

I thought I would take the opportunity to answer a question I’m asked a lot lately: WHAT PROMPTED YOU TO SWITCH TO THE DARK SIDE? It’s a really difficult question to answer because, in all honesty, I’m not sure I have switched. Rather, I’m taking my inclination to look beyond the façade people often present a little further. I’ve always been fascinated by what shapes people and whatever genre I write in I like to strip away the layers and, hopefully, share with readers a little of what lies beneath the surface.

I think I’m leaning towards psychological thriller now because I see people as not all good or all bad, more opposite sides of the same spectrum with some crossover in between. Having become rather jaded in his view of his nemesis in After She’s Gone and Sins of the Father, DI Matthew Adams is less forgiving. To quote his thoughts in the third book in the series, Deadly Intent: “He’d long ago stopped wondering how perverted individuals like Sullivan came into existence. As far as Matthew could see it wasn’t nature or nurture. It was a lethal cocktail of genes, brain function and childhood experience that created monsters like Patrick Sullivan.”

Nature versus Nurture is an age-old question, not one I can hope to answer, but I can’t resist exploring. Maybe I was hoping to find in Patrick Sullivan a redeeming feature, some reason for the reader to empathise if not sympathise or understand. So, have I?

Possibly. I’ve quoted some snippets from Amazon reviews below:

I hated Patrick Sullivan I wanted to reach into the book and throttle him ... but in a love hate kind of way.

In the case of Patrick, you find out he has a daughter that he worships above all others, I found this compelling considering his attitude towards women in general.

Patrick is a nasty villain, his only redeeming feature is his love of his daughter.

Patrick Sullivan. You'll hate him, really despise him and all that he stands for. You’ll wish him dead, you’ll wish him arrested, you’ll wish he’ll fall over his own feet, or slip on a banana skin, but then he’ll show a human side. He’ll show pride and love for his daughter, he’ll miss his brother, he’ll freeze in fear at the sight of a spider, and your heart will break at what he has become, because maybe, just maybe he could have been a better person if he’d been brought up with a different family.

Patrick’s character is brilliantly written. The physical and psychological abuse he received as a child from his violent father has been instrumental in turning him into the monster he is today.

Patrick is a really wonderfully awful creation. I believed in him totally. I hated him but was also mesmerised by him, and just couldn’t tear my eyes away.

Patrick Sullivan is just straight out evil. Even though I felt for him about the way he grew up I still couldn't get over the things that he did. The only person he cares about is his daughter, but to anyone else he's cold and emotionless. He's a predator and will take down everybody who's weaker than him. I felt a deep disgust when I was reading about him. In the back of my mind I was still thinking, he doesn't know any better, but this doesn't justify his actions.”

So, sympathy? Maybe not, but Patrick Sullivan is definitely mesmerising. A tour de force, according to another reviewer. Personally, I think I’ll have to read the book and make up my own mind 😉

Thank you so much again, Jaffa and Jo. I truly appreciated you allowing me to explore my characters a little further. I’m all fired up to keep writing now!

Can I take this opportunity to thank all bloggers and readers for their absolutely fantastic support? It really is tremendously appreciated. Those reviews mean the world to an author and will help a book find its wings. THANK YOU!

He’s killed your child and kidnapped your wife. What would YOU do?

There’s evil and then there’s Patrick Sullivan. A drug dealer, pimp and murderer, there are no depths to which Patrick would not sink, and Detective Inspector Matthew Adams has found this out in the most devastating way imaginable.

When Patrick’s brother is shot dead in a drug bust gone wrong, the bitter battle between the two men intensifies, and Matthew finds it increasingly difficult to hold the moral high ground. All he wants is to make the pimping scum suffer the way he did … the way Lily did.

But being at war with such a depraved individual means that it’s not just Matthew who’s in danger. Patrick has taken a lot from Matthew, but he hasn’t taken everything – and now he wants everything. 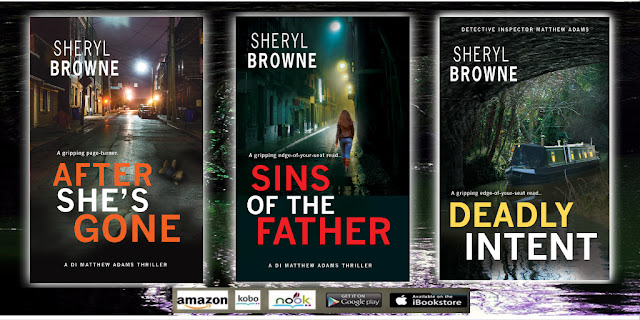 AFTER SHE’S GONE - He’s killed your child and kidnapped your wife. What would YOU do?
SINS OF THE FATHER - What if you’d been accused of one of the worst crimes imaginable?
DEADLY INTENT - Tormented to the edge of sanity …

A member of the Crime Writers’ Association, Romantic Novelists’ Association and awarded a Red Ribbon by The Wishing Shelf Book Awards, Sheryl has several books published and two short stories in Birmingham City University anthologies, where she completed her MA in Creative Writing.

Recommended to the publisher by the WH Smith Travel fiction buyer, Sheryl’s contemporary fiction comes to you from multi-award winning Choc Lit.

Huge thanks to Sheryl for being my guest author today and also to Lusana at Choc Lit for the opportunity to feature another lovely Choc Lit Author on my blog.