Lotta Rae is a young working-class woman who is viciously attacked by a wealthy gentleman. Lotta's family are firm believers in justice and Lotta makes the brave decision to testify in court against her attacker. The guardians of justice support her, or so it seems. William Linden is a barrister about to lose everything. He is failing to live up to his father's formidable reputation and if he loses one more case, how will he house, clothe and feed his wife and young son? Both Lotta and William have decisions to make that will change the course of their lives and the lives of everyone around them for generations to come. Notorious after her trial and unable to return to the life she had before her attack, Lotta’s quest for her own form of justice takes her from the streets of Spitalfields to a Soho brothel, into the heart of the Suffragette movement, to an unimaginable place. One she could never have foreseen.
I'm delighted to be able to share Siobhan's inspiration
for writing The Trial of Lotta Rae
There were three main inspirations for my novel, The Trial of Lotta Rae.
Firstly, much of its setting, the ancient square mile of London on the cusp of the East End is where I lived as a child, and Sunday morning walks with my father on its deserted streets whispered to me of long ago ghostly steps and of those who had walked there before. I often imagined their lives and Lotta Rae took up residence in my mind, taking on a life of her own.
Secondly, the period in which it is set, the turn of the 20th century, that precipice before the First World War has always fascinated me. It was a time of such great hope and promise with incredible scientific advances, a Liberal Government introducing unheard of welfare measures, the suffragettes rising and women finding their voice. All that hope only to be quashed by the darkness of a war which stole and damned a generation. Yet that same war brought about everlasting change. For, innocence having died on those battlefields of France, neither man nor woman was so willing to bow to King & Country and so came mental and social revolution. Which laid the map for our world today.
And lastly. The trial. Often on those City walks I would pass the Old Bailey. And, like Lotta, I would gaze up at the Golden Lady ‘…standing so high. So high, she kept watch over all the children of London; she bid them come. For, she would deliver them justice. And I believed her promise.’ Just as Lotta did.
📖 My Review ...
The Trial of Lotta Rae captured my imagination as right from the start I was on Lotta's side and yet as we discover justice isn't always on the side of the righteous. Bringing the mean moody streets of the East End of London to life we get to experience Lotta's downfall, her naive trust in authority and her search for justice and retribution.
Beautifully written with such a fine eye for historical detail, I felt immersed in the story and raced through the pages eager to discover more, not just about Lotta's sad life but also about the state of England in the early part of the twentieth century with the stalwart rise of the suffrage movement and the creeping threat of war.
The Trial of Lotta Rae is one of those haunting stories which stays with you long after the last page is turned and even as I closed the book my heart was still heavy at everything Lotta had suffered. It's definitely on my book of the year list.
🍷Best read with.. a glass of port and a heavy heart.
About the Author
Siobhan MacGowan is a journalist and writer who lived and worked in London for much of her life before returning to Ireland several years ago. She is from a family of great storytellers, the most prominent of which is her brother, Shane MacGowan of The Pogues. Highlights of Siobhan’s eclectic career include a highly acclaimed solo album ‘Chariot,’ touring with Van Morrison across the US and Europe and appearing in the Johnny Depp produced and Julien Temple directed 2020 film ‘Crock of Gold.’ Siobhan has connections with many of the locations which feature in The Trial of Lotta Rae including Spitalfields, Bishopsgate, Soho and Kings Cross. She lives in County Tipperary.
Twitter @EtainsDream #TheTrialOfLottaRae
@welbeckpublish 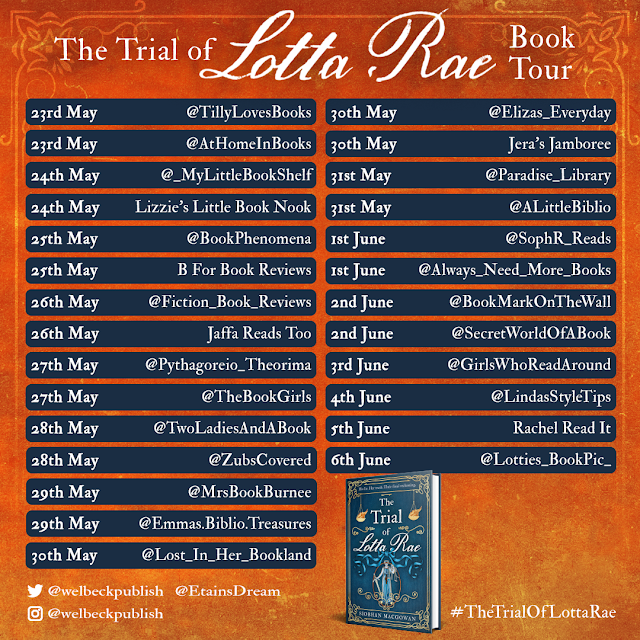