They said they’d keep me safe.

They said, ‘It’s okay, Hannah. You know you can trust me.’

When eight-year-old Hannah Perry goes missing in the small Suffolk village of St Just, the community is rocked. Heading up the investigation is Acting DS Rob Minshull, but he’s out of his depth in a case that seems to mirror the disappearance of a young boy, seven years ago. That search ended in unimaginable tragedy…and Minshull is praying that history won’t be repeated.
But with an investigation full of dead ends, and a kidnapper taunting the police with sinister deliveries of Hannah’s belongings and cryptic notes, the young girl’s life hangs perilously in danger.
Until Dr Cora Lael enters the picture. A psychologist with a unique ability, Cora’s rare gift allows her to sense emotions attached to discarded objects. When she is shown the first of Hannah’s belongings, she hears the child’s piercing scream.
With few leads on the case, could Cora prove Hannah’s only hope? And as time runs out, can they find Hannah before history repeats itself...?
A twisty, original and utterly gripping detective thriller that fans of James Oswald and LJ Ross will love. Don't miss the crime thriller debut from the bestselling women's fiction author, Miranda Dickinson.
📖 My Review...
When eight year old Hannah Perry goes missing in the small Suffolk village of St. Just, it echoes a police investigation which ended in tragedy, and which, seven years later, still remains unsolved. DS Rob Minshull is leading the investigation and is determined not to make the mistakes of the past. When he, controversially, enlists the help of psychologist, Dr Cora Lael,  Minshull hopes this will help the investigation move forward. For Cora Lael is no ordinary psychologist as she has the uncanny ability of being able to sense the heightened emotions of people from their discarded objects. Seen by some as a charlatan, Cora is nevertheless determined to help the investigation in any way she can.
The Secret Voices is a complex, and engrossing, police procedural which is full of twists and turns and delicious red herrings. I enjoyed trying to piece together the complicated jigsaw puzzle pieces of the case and enjoyed watching how the overall story played out. I especially bought into Cora's unique ability, as her skill, as an emotional synaesthete, is quite different and yet lends itself perfectly to this twisty, crime story.
As with any new crime series there is a sense of getting to know the characters and I found Cora's relationship with Rob Minshull to be particularly interesting, as it's one, I am sure, we will get to know more about as the series progresses. It's exciting to be in at the start of a new series especially as this foray into crime fiction is something of a departure for the author who writes romantic fiction as Miranda Dickinson.
Beautifully written, with the right amount of tension and more than enough surprises to keep you guessing, The Secrets Voices definitely gets the series off to a cracking good start. I raced through the book in one sitting, eager to find out whodunit. I can't wait to meet again with Dr Cora Lael and see where the story goes next time...
🍷Best read with... an all-day breakfast and several cups of strong coffee.
About the Author 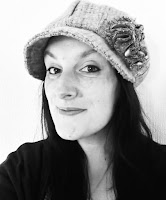 MJ White is the crime pen name of the internationally bestselling author Miranda Dickinson. To date she has sold over one million books worldwide and has been translated into sixteen languages. Miranda has always been a huge fan of crime fiction and The Secret Voices marks the start of a new and exciting departure for her writing.
Twitter @MJWhite13
@HeraBooks
@rararesources 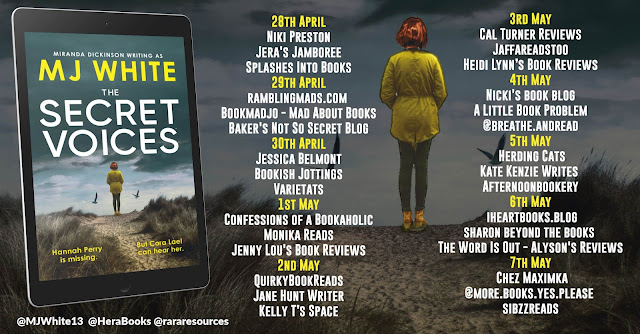