A thrilling story of children in wartime
In the Second World War, hundreds of thousands of children were evacuated from British cities and sent to areas of the country where it was regarded that they would be safer from bombing.
This Government operation was named "Pied Piper". The first evacuations were in 1939 and the second wave in 1940, at the time of the Blitz.
Children went to stay with complete strangers, who had been deemed by the authorities to have spare space in their homes. The hosts were obliged to take the children. Many were unenthusiastic about having a young guest staying with them for an unspecified length of time and there were incidences of unkindness and even cruelty.
"Treason" is a story about two such city children. Judith is a twelve-year-old girl from London, an only child from a very privileged background. She finds herself billeted in a farm on the Isle of Wight. The farm is run by Mrs Orton, a widow, who lives with her twelve-year-old son, Jimmy, and her handicapped brother-in-law. They are joined by another evacuee guest, Alfie, an eleven-year-old boy from a working class family in Portsmouth.
The story tells how their lives change and how the guests adapt to a very different way of life. Like all children they enjoy adventure, but the one on which they embark gets them involved in a danger to their lives and leads them to TREASON!
📖My review..
Aimed primarily at the younger end of the young adult market this historical fiction story is especially interesting as it focuses on both the excitement, and emotion, of those children who were evacuated to the countryside during Operation Pied Piper, which, at the start of the Second World War, saw hundreds of thousands of children taken to places of safety.
Judith Neville is twelve years old and Alfie Field is eleven when they are taken from their families and relocated to the Isle of Wight. Judith's privileged background in a wealthy London suburb couldn't be more different from Alfie who has been brought up in a working class household in Portsmouth and yet neither of their upbringings have prepared the children for life on Cliff Top Farm where they are cared for by kind hearted Vera Orton and her eleven year old son, Jimmy.
The story is really interesting and has more than enough adventure to satisfy the confident reader and yet it is also a story which could be read by an interested adult, I certainly enjoyed reading of Judith, Alfie and Jimmy's adventures. The story has a sympathetic edge which allows a glimpse into the emotional wrench of leaving behind their homes and the difficulties in learning to adapt to new and very different surroundings. The little snippets of historical fact which are highlighted at various points in the story help to put the whole thing into context.
The dramatic ending certainly lends itself to a continuation of this Cliff Top Farm series with the next adventure "Treachery" to follow...as they say, watch this space.
🍵 Best read with...a glass of warm milk and a slice of Vera's apple pie.
About the Author 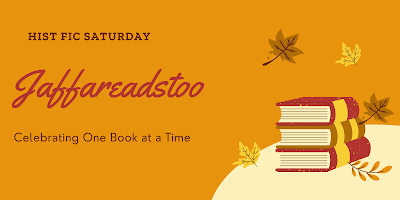