📖 Blog Tour ~ Tell Me Your Lies by Kate Ruby

Lily will do anything to protect her picture perfect family. She’s made ruthless choices to make sure their secrets stay buried, and she’s not going to give up control now.
Rachel is her middle daughter. When her partying tips into addiction, Lily hires renowned therapist and healer, Amber, as a last resort. But how much are Rachel’s problems down to the very secrets Lily is determined to keep locked away?
Amber is the skilled and intuitive confidante that Rachel desperately needs. But as Rachel falls increasingly under her spell, pulling even further away from her family, Lily grows suspicious that there is a far more dangerous reason for Amber’s arrival in all their lives.
📖 My Review..
The fractured relationships of a family are laid bare in this clever psychological thriller which brings the story from the viewpoint of three main narrators, namely Lily, Rachel and Amber.
We pick  up the story some twelve months before when Rachel is admitted to hospital following a drink and drugs binge. In desperation, Lily, Rachel's mother employs the services of Amber, a psychotherapist and healer, whose empathetic skills seem to be just what is needed to bring Rachel out of her spiral of self destruction. Over the course of the year, Rachel becomes more reliant on Amber and more estranged from her own mother and that's when the tension really starts to bite.
Tell Me Your Lies is an interesting window into the lives of a dysfunctional family and the many reasons why they are so out of step with each other becomes apparent as this dark and sinister story progresses. Creative, intelligent, and with enough great twists and turns in the plot which kept me turning the pages, Tell Me your Lies is a great debut from an exciting new talent in this psychological suspense genre.
📖 Best Read with.. a glass, or two, of ice cold vodka
About the Author
Kate Ruby is a producer and screenwriter, with a high flying career in television. Tell Me Your Lies, a psychological thriller, is her debut novel and is currently in development with a major TV show. As an executive producer for drama, she spent a decade at the BBC, working on shows including Spooks and Being Human. Currently head of Television for a global production company she has worked on major Netflix shows including Watership Down, Traitors and The English Game. She has recently worked on the BBC/HBO adaption of JP Delaney's bestselling thriller The Girl Before staring Gugu Mbatha Raw and David Oyelowo.
Twitter @katerubybooks #TellMeYourLies
@simonschusteruk
@midaspr 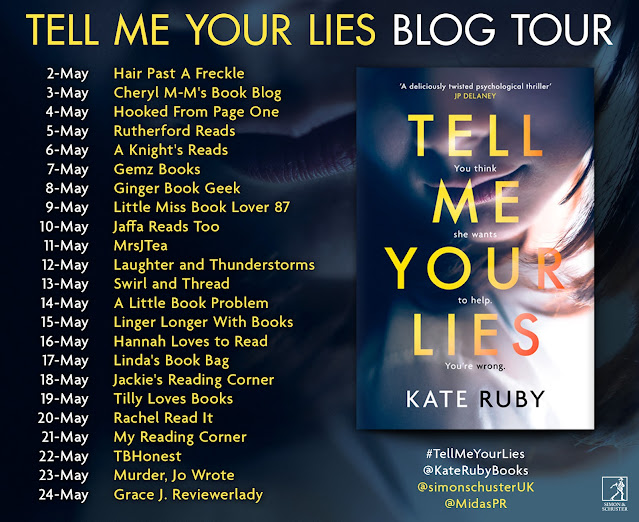