Newcastle 1955
Monica haunts the quayside picking up men of a certain age.
Then one of them is found dead.
Since nobody knows what she does at night,
she can't be in the frame for the murder.
Can she?
At her lowest point, she meets Bobby Wilson,
an ordinary lad, handsome in his way.
But is this the right time to fall in love?
As the oily Tyne flows past the wharfs and under the iconic bridge, middle-aged men are being targeted by a vicious killer. Monica Brown, damaged, abused, just happens to be in the area - just happens to be excited by the murders.
Dog Leap Stairs is a blend of psychological realism and crime; dark, claustrophobic and atmospheric, it is both a portrait of Tyneside in the 1950s and an account of one woman's struggle against her true nature.
📖 My Review ...
Dog Leap Stairs took me by surprise, in a good way, because although we sense that Monica Brown has a dark and rather suspicious lifestyle I couldn't help but warm to her and with this beautifully drawn depiction of a deeply troubled character she comes vibrantly to life. Monica is such a complex women that it takes the length of the story to really get to know her and even then there were still elements of her personality which took me by surprise. All credit to the author for making this rather sinister character into someone who, in the end, I came to rather admire.
The series of brutal murders which are taking place in the city are what forms the crux of the plot and although we may our suspicions about the perpetrator there's enough complexity in the plot to keep us guessing and it's certainly what kept me turning the pages to find out just what's going on in Monica's complex life and the final denouement, when it comes, doesn't disappoint.
Whilst the strength of the characters who flit into and out of Dog Leap Stairs give the story its soul, the wonderful depiction of 1950s Newcastle certainly gives the book its beating heart. The city comes vibrantly to life especially in the dark and damp alleyways where a murderer stalks the night.
Deliciously chilling, and darkly atmospheric, Dog Leap Stairs is one of those immersive stories which stays with you long after the last page is turned.
🍫Best Read with...bitter and deliciously dark chocolate
Read an interview with Barbara Scott Emmett by clicking here.
More About Barbara 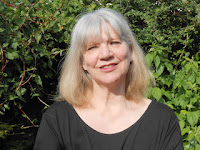 After many years away, Barbara Scott Emmett is now back living in her home town of Newcastle upon Tyne. She has been writing for many years and has five novels, a book of short stories and a selection of quirky poetry to show for it. She lives in a house overlooking the river with her husband, the writer Jimmy Bain, and their cat, Kitty.
Twitter @BSE_Writer
Amazon UK
Amazon.com