I am delighted to join in with this blog tour

The smallest man. The biggest heart. The mightiest story. A compelling story, perfect for fans of The Doll Factory and The Familiars.
Nat Davy longs to grow tall and strong and be like other boys, but at the age of ten, he’s confronted with the truth; he’s different, and the day when the stares and whispers stop is never going to come. Narrowly escaping life in a freak show, he’s plucked from his family and presented as a gift to the new young queen of England – a human pet to add to her menagerie of dogs and monkeys. But when Nat realises she’s as lost and lonely as he is, the two misfits begin an unlikely friendship – one that takes him on an unforgettable journey, as England slides into the civil war that will tear it apart and ultimately lead the people to kill their king. Inspired by a true story, and spanning two decades that changed England for ever, The Smallest Man is narrated by an irrepressible hero with his own unique perspective on life. His story is about being different, but not letting it hold you back. About being brave enough to take a chance, even if the odds aren’t good. And about how, when everything else is falling apart, true friendship holds people together.

My thoughts..
When ten year old Nathaniel Davy is taken from his family and given as a gift to Henrietta- Maria, the fifteen year old Queen of England, Nat's life changes for ever, for not only does he escape the poverty of his family, but it also places him quite firmly at one of the most beguiling royal courts in Europe.
That Nat and the young Queen have much is common is rather hard to believe as Nat is primarily there just for the Queen's amusement, but as this unlikely friendship grows it becomes obvious that both are a little bit lost, and frighteningly lonely, in the strange new world in which they find themselves. Nat has known since childhood that he is different and his small stature singles him out as an easy target for bullies but with the help of his champion the Queen, good friends and a fierce determination, Nat soon becomes a force to be reckoned with, and, it must be said, something of a celebrity at the royal court.
Living through the tumultuous years of the build up, and eventual outcome, of the English Civil War, Nat is perfectly placed to give his own unique view of proceedings and it is Nat's voice that we hear loud and clear throughout the whole of the story. It's been really refreshing to have a different view of the Civil War period that didn't focus on battles and conflict but rather told a more domestic story of not just what was happening in the small English villages but also with Queen Henrietta Maria, who is often criticised for touting the English crown jewels around Europe in the hope of raising much needed funds for the King's army.
Filled with lively adventure, The Smallest Man brings history to life in a unique and fascinating way.  I have thoroughly enjoyed getting to know Nat Davy and have followed his story with great interest, always hoping that life would turn out well for this small man with the big heart.
About the Author Frances Quinn read English at King’s College, Cambridge, and is a journalist and copywriter. She has written for magazines including Prima, Good Housekeeping, She, Woman’s Weekly and Ideal Home. She lives in Brighton with her husband and Tonkinese cats. The Smallest Man is her first novel.
Twitter @franquinn
@simonschusterUK
@RandomTTours 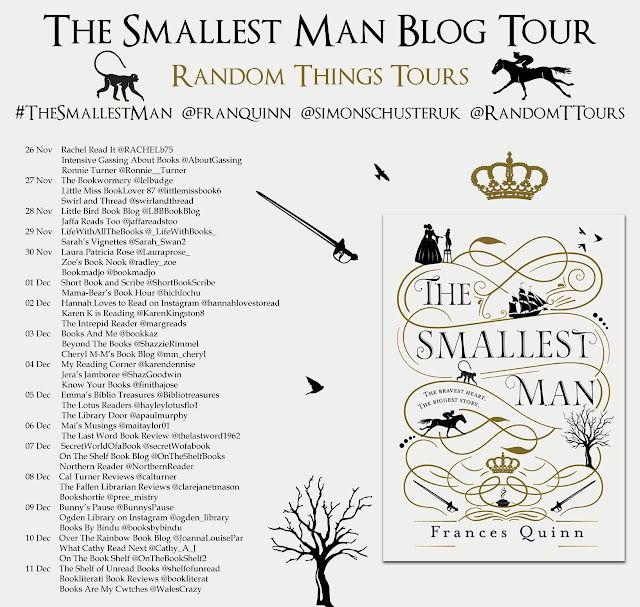