Betrayal, treachery, treason, deceit, perfidy – all names for the calculated violation of trust. And it’s been rife since humans trod the earth.

An unwitting act of treason

Could you resist the forces of misplaced loyalty, power hunger, emotional blackmail, or plain greed? Is there ever redemption, or will the destruction visit future generations and even alter history? These questions are still with us today.
Read twelve tales by twelve accomplished writers who explore these historical yet timeless challenges from post Roman Britain to the present day...
AD455 - Roman leader Ambrosius is caught in a whirlpool of shifting allegiances
AD940 - Alyeva and cleric Dunstan navigate the dangers of the Anglo Saxon court
1185 - Knight Stephan fights for comradeship, duty, and honour. But what about love?
1330 - The powerful Edmund of Kent enters a tangled web of intrigue
1403 - Thomas Percy must decide whether to betray his sovereign or his family
1457 - Estelle is invited to the King of Cyprus’s court, but deception awaits
1483 - Has Elysabeth made the right decision to bring Prince Edward to London?
1484 - Margaret Beaufort contemplates the path to treason
1577 - Francis Drake contends with disloyalty at sea
1650 - Can James Hart, Royalist highwayman, stop a nemesis destroying his friend?
1718 - Pirate Annie Bonny, her lover Calico Jack, and a pirate hunter. Who will win?
1849/present - Carina must discover her ancestor’s betrayer in Italy or face ruin.
What did I think about it..
I am quite often guilty when reading anthologies to dive in somewhere in the middle, so I  was determined when reading Historical Stories of Betrayal to begin at the very beginning. After all it's the very best place to start in this fascinating anthology which takes us from the Roman occupation of Britannia in 455 AD through to the surviving alternative state of Roma Nova in the 20th and 21st Century.
So often betrayal, retribution and revenge has played a huge part in our collective history when destiny turned on a heart beat and what this anthology does so successfully is give us a collection of stories which feature the act of betrayal so succinctly. Each story comes in at around forty or so  pages which I read quite comfortably in an hour, transported back in time, whether it be witnessing inglorious death at the feet of Venus, witnessing skulduggery in the court of the Anglo-Saxon kings or grieving for a young and frightened boy King forcibly removed from those who loved him.
Each one of the twelve authors is at the top of their game in producing high quality historical fiction and the twelve stories definitely offer a tantalising glimpse into what they do so well. Five of these authors are already familiar to me, I have read and enjoyed their work and expected no less than to be beguiled by their stories - I wasn't disappointed. Of the remaining seven authors whose work was a new experience I was just as intrigued by their writing skills and the clever way they brought their interpretation of history alive in the imagination.
There is no doubt that absorbing fiction brings history alive and all that's needed is an intriguing entrée into a long forgotten world and what this anthology does so admirably is give us that starting point, firing the imagination with a longing to discover more not just about the history being described in such fascinating detail, but also in reading more of the work of these twelve talented writers.
Historical Stories of Betrayal is available now - click here for more details. It's currently free to download.
The authors
Judith Arnopp, Anna Belfrage, Derek Birks,
Helen Hollick, Amy Maroney, Alison Morton, Charlene Newcomb, Cryssa Bazos, Mercedes
Rochelle, Tony Riches, Elizabeth St John, and Annie Whitehead.
Follow on Twitter @HistFictioneers #Betrayal
Facebook 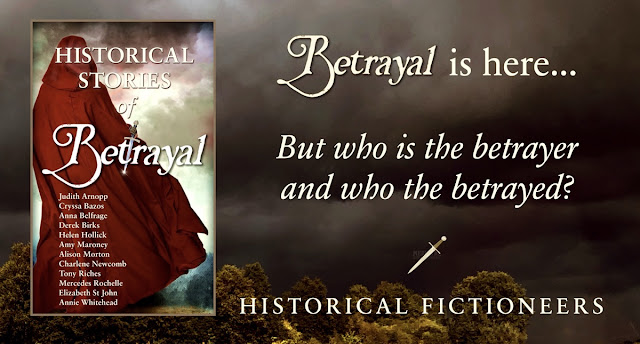