Blog Tour ~ The Archers : Ambridge at War by Catherine Collins

Delighted to be joining the Blog Tour today

In this wonderful new novel celebrating the 70th anniversary of the beloved radio show, follow the lives of the families of Ambridge before it all began…
It’s 1940 and war has broken out. It is midnight at the turn of the year, and Walter Gabriel speaks the same line that opened the very first radio episode – 'And a Happy New Year to you all!' For Ambridge, a village in the heart of the English countryside, this year will bring change in ways no one was expecting.
From the Pargetters at Lower Loxley to the loving, hard-working Archer family at Brookfield Farm, the war will be hard for all of them. And the New Year brings the arrival of evacuees to Ambridge, shaking things up in the close-knit rural community.
As the villagers embrace wartime spirit, the families that listeners have known and loved for generations face an uphill battle to keep their secrets hidden. Especially as someone is intent on revealing those secrets to the whole village . . .
BBC Radio 4’s The Archers has aired over 19,000 episodes since the first pilot in 1951, and has nearly 5 million regular listeners. In the quarter October – December 2019 it was also the most popular on demand radio programme on BBC Sounds.
What did I think about it..
There's nothing more reassuring than hearing that familiar theme tune and settling down with a cup of tea to listen to the latest episode of The Archers on BBC Radio 4. What's so wonderful about Ambridge at War is that it conjures the same feeling of comfort and stability as the radio programme. However, for those who haven't followed any of the radio programme it's a lovely opportunity to get to know some of the background to the village and the people who call the place home.
The story opens on New Years Eve in 1940 when the country is about to go into its first full year of wartime and for the village of Ambridge, and its inhabitants, there will be some changes to be made into how things are done. There's no doubt that various adjustments have to be made in order to keep everything ticking over and for some residents there are unsettled times ahead. Of course there are petty squabbles and the same local animosities, but generally the wartime spirit kicks in and everyone starts to do their bit for the wartime effort.
It’s been huge fun to travel through 1940 with the inhabitants of Ambridge, learning their dirty little secrets, discovering their insecurities, and celebrating their small victories and moments of joy. The characterisation is delightful and so well described that I could picture everyone quite clearly, from the Pargetters at Lower Loxley, to the Archers at Brookfield Farm and everyone in between, both the village of Ambridge, and the people, come gloriously alive.
When The Archers was first broadcast in 1951 it was described as a story of country folk and that’s exactly what this is all about. Beautifully written, with a fine eye for quirky detail,  the ethos of The Archers is well and truly alive in a lovely story, which warmed my heart and made me smile, and in this tough year that’s worth its weight in gold.
About the Author
Catherine Miller is the author of 18 novels under her own name and other pseudonyms. Born to an Irish family in London, her career took her from producing radio commercials to being a voiceover agent for various stellar actors. Nowadays she writes all day at home in Surrey, occasionally lifting her head to raise her daughter and feed the dogs.
Twitter #AmbridgeAtWar
@simonschusterUK
@RandomTTours 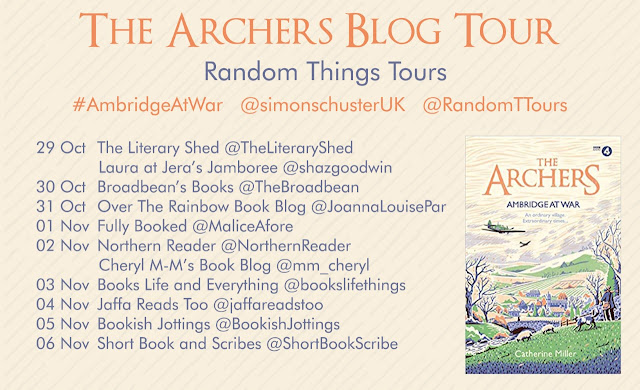