Blog Tour ~ A Mother Like You by Ruby Speechley

Thrilled to join in with this Blog Tour today

Kate Marshall lives an enviable life. Married to handsome, charming, James, owner of a successful company, she seems to have it all.
But falling pregnant at 45 was never part of the plan. Especially as Kate’s hiding a devastating secret – one that she’s been running from for twenty years.
So when ex-boyfriend Paul comes back into her life, threatening to expose the truth about what Kate did, the clock is ticking. Can she keep her secrets and finally be the mother she always dreamed of – or will her past lies destroy her perfect life?
What did I think about it..
Kate and James seem to have the ideal life with a good relationship, a successful business and an enviable lifestyle. However, all this is set to change when Kate learns that she is pregnant, and at aged forty-five, this has never been on her agenda, especially as James is adamant he doesn't want children.
What the follows is a twisty, turny, psychological thriller which looks at the complicated process of motherhood, especially when all is not as it seems either in Kate's present life or in her past. And as some really dark and complicated secrets threaten to overwhelm her, so Kate begins to look at the complicated relationship she has with her own mother and the heightened awareness that something has gone badly wrong in each of their secretive pasts.
A Mother Like You is one of those completely addictive stories which keeps you turning the pages long after you should have put the book away to do something else. The plot flows beautifully drawing you in ever deeper into a world of abandonment, trauma and deeply complicated secrets. The story is quite dark in places, with  quite a lot of emotional issues being expressed but the author brings everything together in a realistic and very readable way.
About the Author
RUBY SPEECHLEY was born in Lisbon, Portugal, and was brought up in a British-Portuguese family. She has an MA in creative writing from Sheffield Hallam and is a Faber Academy alumna. Her work has been longlisted for the Lucy Cavendish Fiction prize, The Bath Novel Award and Caledonia Novel Award, amongst others. She also won Best Opening Chapter at the York Festival of Writing in 2017. Ruby’s debut novel, Someone Else’s Baby was published by Hera Books in July 2019. It is a chilling psychological thriller about a young woman who becomes a surrogate but finds that her act of kindness comes with devastating consequences. Her second novel, Every Little Secret was published in April 2020.
Twitter  @rubyspeechley #AMotherLikeYou
Website  Amazon UK
@Hera
@Rararesorces 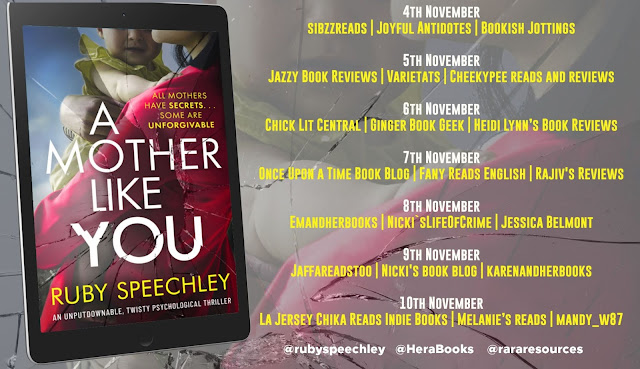