When a Prussian smuggler is imprisoned in Morpeth Gaol in the winter of 1703, why does Queen Anne's powerful right-hand man, The Earl of Nottingham, take such a keen interest?
At the end of the turbulent 17th century, the ties that bind men are fraying, turning neighbour against neighbour, friend against friend and brother against brother. Beneath a seething layer of religious intolerance, community suspicion and political intrigue, The Running Wolf takes us deep into the heart of rebel country in the run-up to the 1715 Jacobite uprising.
Hermann Mohll is a master sword maker from Solingen in Prussia who risks his life by breaking his guild oaths and settling in England. While trying to save his family and neighbours from poverty, he is caught smuggling swords and finds himself in Morpeth Gaol facing charges of High Treason.
Determined to hold his tongue and his nerve, Mohll finds himself at the mercy of the corrupt keeper, Robert Tipstaff. The keeper fancies he can persuade the truth out of Mohll and make him face the ultimate justice: hanging, drawing and quartering. But in this tangled web of secrets and lies, just who is telling the truth?
What did I think about it..
Hermann Mohll is a master sword maker from Solingen in Prussia, who discovers momentous cracks in the foundation of everything he once held true and with a heavy heart he moves to the north east of England with his family. The transition between countries isn’t easy, especially when Mohll gets drawn into dangerous events which are beyond his control and as we move effortlessly in time so we have a tantalising glimpse into a country which is steeped in deadly turmoil. The latter years of the seventeenth century are fraught with danger and religious adversity, and the dark shadow of history is very much apparent as this complex story progresses.
The Running Wolf is wonderfully atmospheric. The opening chapter creates such an immediate sense of time and place that I was catapulted back through time and became part of the Solingen community, conjuring the dreams thieves as they tipped their beady eye over the sleeping villagers.  And for a master craftsman like Hermann Mohll, who is struggling with the indecision of leaving his homeland and breaking with the guild, his life will never be the same again.
There is no doubt as to this author’s ability to tell a good story. The Running Wolf as all the trademarks of her undeniable skill in discovering a hidden truth and writing an authentic and historically accurate story which is just waiting to be told. She did this with the Newcastle witch trials in Widdershins and Sunwise and has done it again in The Running Wolf, combining little known factual history with an engrossing fictional tale of intrigue, danger and skulduggery.
Exciting, atmospheric and filled with a deadly sense of danger, The Running Wolf is expertly researched and beautifully written historical fiction.
About the author 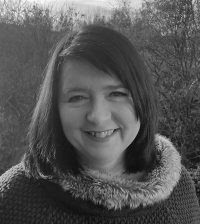 Helen Steadman lives in the foothills of the North Pennines, and she particularly enjoys researching and writing about the history of the north east of England. Following her MA in creative writing at Manchester Met, Helen is now completing a PhD in English at the University of Aberdeen to determine whether a writer can use psycho-physical techniques to create authentic fictional characters.
Twitter @hsteadman1650 #TheRunningWolf
Website
Amazon UK
@ImpressBooks1
@LoveBooksGroup 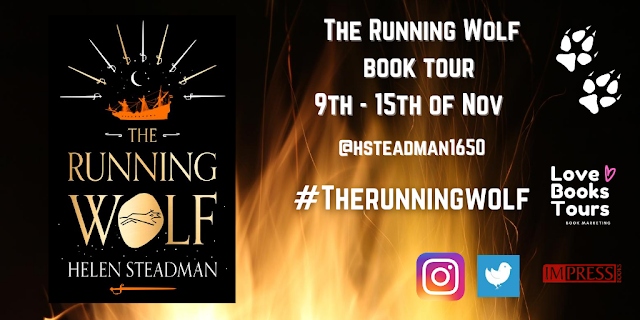