The Story that didn’t make it: The Black Eagle

Sometimes the parts an author finds most interesting are the ones that editors cut out!

That happened to me with my "factional" novel, The Ocean Liner, which contains a number of real-life characters.

One of them who ended up on the cutting-room floor was Hubert Fauntleroy Julian, the Black Eagle of Harlem.

This larger-than-life character was celebrated and vilified in equal measure in the 1920s, 30s and 40s. Handsome, golden-tongued and elegant, Julian billed himself as the first Black aviator at a time when Negroes were considered too primitive to drive a car, let alone fly an airplane. He was part authentic pioneer, part huckster. His detractors said he was merely a bootlegger and a daredevil stuntman who threw himself out of airplanes in red long johns.

The Harlem Eagle's penchant for raising money on behalf of grand schemes, and then pocketing the proceeds, tarnished his career more than once. In fact, it was to escape prosecution that he was forced into a hasty flight from Harlem in a seaplane built by himself, which fell to pieces shortly after take-off and precipitated him into Flushing Bay with serious injuries.

He also patented various ingenious aerial devices, including a motorized parachute for airplanes, which he called the parachutta-gravepreresistra. Demonstrating a smaller model, the saxophoneparachut-tapreresistationist, he sailed across the New York skyline, playing the saxophone, but unfortunately crashed through a Harlem police station window, and was arrested. Despite this inauspicious start, Julian had sold the patents to a Canadian aircraft company as the 'Airplane Safety Appliance.' The craziest of his schemes had a strange way of turning into something profitable for himself, if not for others.

When Mussolini's Fascist army invaded Ethiopia (then known as Abyssinia) in 1935, Julian rushed to the defence of the African nation. Wearing a dramatic uniform designed by himself, and accorded the rank of Colonel in the Ethiopian Air Force, he cut an impressive figure as he trained the barefoot tribesmen. As usual, his career was chequered. He crashed the Emperor's personal Gypsy Moth biplane into a thorn tree during a ceremonial parade in Addis Ababa. The plane had been a present from Selfridges department store in London, the Emperor's favourite shop, and the Emperor was furious. The number of Julian's flights which ended in crashes led to the suspicion that he didn't really know how to fly a plane at all.

He managed to talk his way out of the disaster, and Haile Selassie awarded him the Order of Menelik, a spectacular red-and-green enamelled cross on a brilliant yellow ribbon. However, Ethiopia tragically proved no match for Mussolini's mechanized modern army, and Julian was forced to retire.

During the Second World War which followed, Julian challenged Air Marshall Hermann Goering, the chief of Hitler's Luftwaffe, to an aerial duel over the Channel, saying that the Nazis had insulted the black races unforgivably, and offering to settle the matter like gentlemen, in fighter planes. Goering did not respond to the challenge.

Julian followed this with a scheme to raise an army of Negro pilots, nurses and doctors, 'The Friends of France,' to assist the French in their war against the Nazis. France, he said, was among the few European nations to have treated the black peoples with kindness.

Julian recommended that every Negro volunteer should receive French citizenship and a degree from the Sorbonne. This proposal, like so many others, failed to win approval.

The Black Eagle gave up aviation after the war but found his metier as an arms dealer during the 1960s and 1970s, selling munitions to various states in South America and Africa. He remained a controversial figure until his death in 1983 at the age of eighty-six. The enduring memory he leaves is of a magnificent swashbuckler who inspired a generation of Black pilots.

Marius Gabriel served his author apprenticeship as a student at Newcastle University, where, to finance his postgraduate research, he wrote thirty-three steamy romances under the pseudonym Madeleine Kerr. Gabriel is the author of several historical novels, including the bestsellers The Designer, The Seventh Moon, The Original Sin, and the Redcliffe Sisters series: Wish Me Luck As You Wave Me Goodbye and Take Me To Your Heart Again. Born in South Africa, he has lived and worked in many countries including Italy and Spain, and now divides his time between London and Cairo.

Huge thanks to Marius for spending time with us today and for this fascinating guest post.

Do visit the other blog tour stops for more exciting content 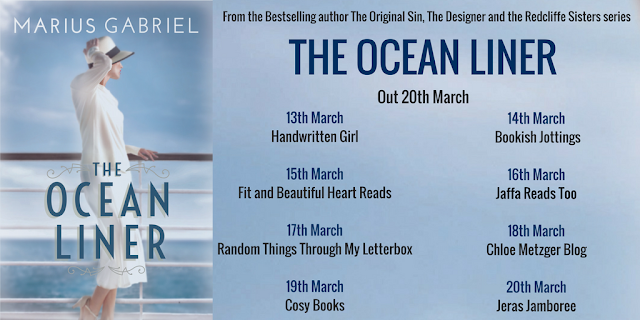 The Ocean Liner by Marius Gabriel is published by Lake Union Publishing on 20th March.

What's it all about 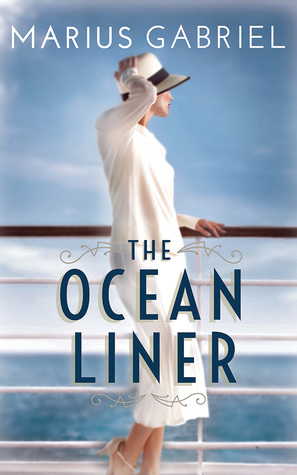 In September 1939, cousins Masha and Rachel Morgenstern board the SS Manhattan bound for New York, leaving behind everything – and everyone – they know in war-torn Europe. America offers a safe haven, but to reach it they must survive an Atlantic crossing fraught with the danger of German U-boats and their lethal torpedoes,

Their only distraction from peril is the drama of life on board. Among their fellow passengers are the composer Igor Stravinsky, making a new start after a decade of personal tragedy; and Rose Kennedy, wife of the US ambassador to London, determined to keep her four young children from harm. And then there’s Thomas, a young Nazi with a secret ...

All 1,500 passengers on board are hoping to find a bright future at the end of their perilous journey. But as they discover, fate is not smiling upon them all.

Thoroughly researched, The Ocean Liner is a fictionalised portrayal of some of the true stories from The Golden Age of the Ocean Liner, and sensitively pays tribute to some of true tragedies of the period. From the destruction of the SS Athenia, the heroics of Commodore Albert ‘Rescue’ Randall, to the events that changed Rose Kennedy’s life forever, Gabriel brings to life a cast of refugees escaping WW2.