Blog Tour ~ From a Low and Quiet Sea by Donal Ryan


From a Low and Quiet Sea is Donal Ryan’s most expansive book to date, partially set in Syria and partially in the familiar territory of rural Ireland.

Farouk’s country has been torn apart by war.

Lampy’s heart has been laid waste by Chloe.

John’s past torments him as he nears his end.

The refugee. The dreamer. The penitent. From war-torn Syria to small-town Ireland, three men, scarred by all they have loved and lost, are searching for some version of home.

Each is drawn towards a powerful reckoning, one that will bring them together in the most unexpected of ways.


Beautifully written, with not an ounce of triviality, From A Low and Quiet Sea, is deceptively astute and lays bare the frailty of humanity in its most distinct form. Told in 4 parts, there seems little to connect the story of Farouk, the Syrian refugee, with that of Lampy living in rural Ireland who drives old folk around in his bus, and even less in common with the business man, John, who at the end of his life repents his past sins.

Three men with very different stories to tell, share the remnants of their lives in stark and contrasting stories which highlight their search for meaning and resolution.That their lives are all so very different, adds a subtle poignancy to the eventual coming together of all the loose ends which tether them, irrevocably together.

The author has a wonderful ability to spin a good tale. He is a magical weaver of words, bringing the narrative to life in such a beautifully controlled way, that there is never a word wasted or an emotion unexpressed. Deftly stitching together the whole process of storytelling and instantly connecting with your imagination, the characters come alive and are so sharply drawn they could be etched in glass and linger long after the story is finished.

From a Low and Quiet Sea says all that needs to be said in just 181 pages and even now, after finishing the story, it still gives me goosebumps. 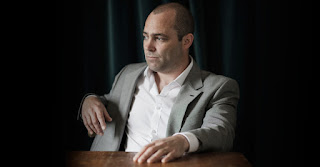 Donal Ryan is from Nenagh in County Tipperary. His first three novels, The Spinning Heart, The Thing About December and All We Shall Know, and his short story collection A Slanting of the Sun, have all been published to major acclaim. The Spinning Heart won the Guardian First Book Award, the EU Prize for Literature (Ireland), and Book of the Year at the Irish Book Awards; it was shortlisted for the International IMPAC Dublin Literary Award, longlisted for the Man Booker Prize and the Desmond Elliott Prize, and was recently voted ‘Irish Book of the Decade’. His fourth novel, From a Low and Quiet Sea, will be published in March 2018. A former civil servant, Donal lectures in Creative Writing at the University of Limerick. He lives with his wife Anne Marie and their two children just outside Limerick City.

Do follow the other stops on the blog tour 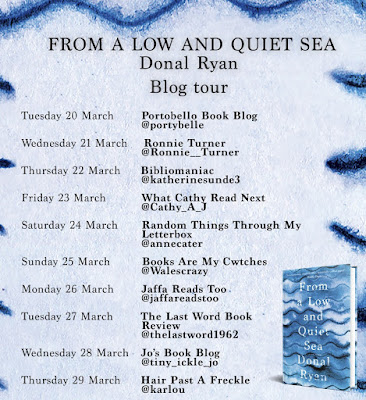