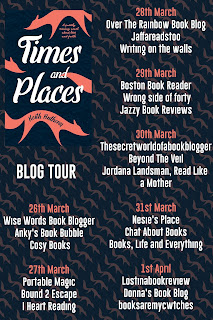 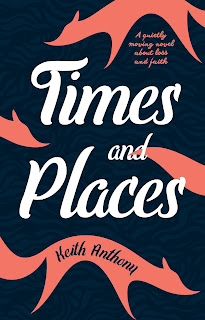 Ten years after his daughter Justine's death, an anxious Fergus embarks on a cruise with his wife. On board, he meets a myriad of characters and is entranced by some, irritated by others and disgusted by one. These turbulent feelings, combined with a sequence of bizarre events, only lead to his increased anxiety.
In a series of flashbacks, Justine enjoys an ultimately short romance, a woman concludes she killed her and an investigating police officer is drawn into her idyllic world. Fergus, haunted by poignant memories, withdraws in search of answers.
Back on the cruise, Fergus reaches breaking point, fearing he has done something terrible. By the time the ship returns, his world has changed forever.
"Times and Places" spans Atlantic islands, the Chiltern countryside, Cornish coasts and rural Slovenia, all of which provide spectacular backdrops to a humorous and moving tale of quiet spirituality.

Ten years after the death of their only daughter, Fergus and Sylvie embark on a cruise around the beautiful mid-Atlantic. That Justine’s untimely and tragic death has affected them deeply is observed in the way that they quietly attempt to put their lives back together after this devastating loss. The story evolves slowly, highlighting certain moments in Justine’s life and with calm reflection allowing her short time on earth to play out in a meaningful way.

The author has a very gentle writing style which allows the emotional aspect of the story to have a profound effect. On some occasions the story reads like a travelogue as Fergus and Sylvie enjoy their Atlantic cruise, taking part in the activities on board ship and looking forward to their visits to different places and observing foreign cultures. Whilst at other times, the story seems almost like a gentle commentary on the vagaries of life, and of the unpredictability of being in the wrong place at the wrong time.

All is not unhappiness though, as there are some nice splashes of humour amongst the sadness and I enjoyed reading about the other passengers on board the cruise ship, some of whom irritated Fergus with their pettiness and bad manners.

I enjoyed the alternate chapters which take us away from Fergus and Sylvie aboard ship and allow us more of a glimpse into the background of the story. And as characters flit into and out of the story during these chapters, so a broader picture is allowed to emerge.

I found Times and Places to be a remarkably insightful story with some spiritual references which slotted comfortably into narrative. I was impressed how the themes of love, loss and grief were handled in such a quiet and reflective way. Keith was born and brought up in the Chilterns, to where he returned after studying French at university in Aberystwyth and a subsequent spell living in west London. He has a love of nature, both in his native Buckinghamshire countryside, but also in Cornwall and wherever there is a wild sea.

Keith has been lucky enough to spend time living in France, Spain, Belgium, Serbia and Croatia, as well as being a regular visitor to Germany, and languages were the only thing he was ever half good at in school. Since graduating he has worked in government departments, but between 2005 and 2008 he was seconded to the European Commission in Brussels and, thanks to a friend from Ljubljana he met there, has travelled regularly to Slovenia, getting to know that country well.

Keith's other great love is music and he plays classical and finger picking blues guitar, though with persistently limited success. He has always enjoyed writing, including attempts at children's fiction, and in 2016 he began work on his first full book with “Times and Places" the end result: an accessible, observational story, mixing quiet spirituality with humour, pathos and gothic horror, and setting it against a rich backdrop of the natural world