A gripping new thriller featuring the brilliantly complex psychologist Dr Jessie Flynn, who struggles with a dark past.

Two bodies on the beach. One killer out for revenge…

Two years ago, a young girl was murdered while playing on the beach, a doll left by her side. DI Bobby ‘Marilyn’ Simmons failed to catch her killer and he’s been tormented with guilt ever since.

So when another dead girl is found in the dunes, another doll, he knows this could be his only chance to silence his demons.

Psychologist Dr Jessie Flynn is called in to help with the investigation. But she’s being led into a web of lies and deceit by a new patient called Laura – a deeply disturbed woman who wants Jessie as her friend.

When links emerge between Laura and the two dead girls, Jessie’s worst nightmare becomes reality. For in the dark world of a twisted killer, she begins to realize just how treacherous friends can be…

In Two Little Girls, psychologist, Jessie Flynn, once again has an emotional and difficult time. Her flawed personality really seems to hit home in this story and I was just as fascinated by the way the author weaves Jessie's personal demons into the proceedings, as I was by the actual crime story itself.

Working alongside DI Bobby 'Marilyn' Simmons, Jessie gets drawn into a particularly sad and rather complex murder investigation into the death of a young girl who has been found on a south coast beach. That there seems to be just one suspect lends an air of sharpness to the investigation, as you know, from reading the previous crime novels in this series that everything is not going to be quite so neatly tied together. Simmons finds that he is faced with an almost identical murder to that of a young girl some two years before when he failed to catch the killer. This time around he is he not going to let them get away with it a second time.

The dynamic between Jessie and DI Simmons is as complex as ever, they’re an enigmatic pairing, each as badly damaged as the other and yet, they work well as a team and I enjoy the times they join forces in the story. The brief glimpses into Jessie’s relationship with her boyfriend, Callan, are all too brief, I feel that there is so much to be explored in their relationship and I hope to see this evolve more over time.

The author writes with a fine eye for both crime, and character detail. I so enjoy trying to piece together all the jigsaw pieces of the puzzle, and several times I thought I had the way of things only to have my pondering shattered when something new was added to the mix. The mystery at the heart of the novel, as always, has a sharp combination of character and procedural, which works really well. And the dark side to the story, with the beguiling flashbacks into the past life of one of the characters, helps to give it that all important edginess.

Two Little Girls is now the third book in the Jessie Flynn series but can be read as a standalone novel. I think it is my favourite book of the series, to date.

Kate Medina has always been fascinated by the ‘whys’ of human behaviour, an interest that drove her to study Psychology at university and later to start a crime series featuring clinical psychologist, Dr Jessie Flynn. She has an MA in Creative Writing from Bath Spa University and her debut novel White Crocodile received widespread critical acclaim, as did Fire Damage, the first book in the Jessie Flynn series.

Before turning to writing full time, Kate spent five years in the Territorial Army and has lectured at the London Business School and the London School of Economics. She lives in London with her husband and three children. 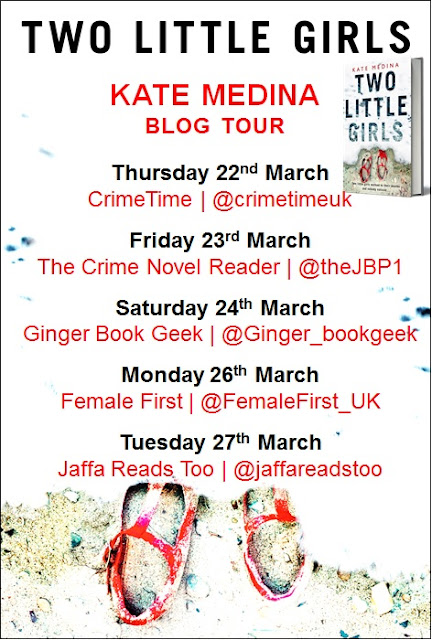