The Invisible Hand is about a boy, Sam, who has just started life at a boarding school and finds himself able to travel back in time to medieval Scotland. There he meets a girl, Leana, who can travel to the future, and the two of them become wrapped up in events in Macbeth, the Shakespeare play, and in the daily life of the school. The book is the first part of a series called Shakespeare´s Moon. Each book is set in the same boarding school but focuses on a different Shakespeare play.

Written for a young adult reading audience, The Invisible Hand explores the themes in Shakespeare's, Macbeth, thus making the story accessible and hopefully readable for a modern young audience for whom Shakespeare's more ponderous prose can often seem insurmountable.

I liked the idea of setting the story in a boarding school,with a young protagonist who thrives on adventure, and even though Sam is challenged by his time travel experience, and who wouldn't be alarmed about landing in medieval Scotland, there are lots of elements of surprise and more than a hint of danger to be found in the story overall.

The author writes well with his target audience in mind and neither patronises, nor protects them from the danger which is so often inherent in Shakespeare's work, and in particular in Macbeth. I enjoyed the historical aspects of the story which are nicely done and enjoyed Sam's reaction, particularly to the witches...well, it wouldn't be Macbeth without them, would it ?

The Invisible Hand is the start of a series of young adult novels entitled Shakespeare's Moon in which different Shakespearean plays will be featured but with the continuity of the same boarding school setting. I'm looking forward to reading more. 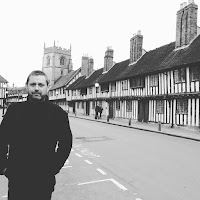 James was born on the Wirral, England, in 1973 on a rainy Thursday. He shares his birthday with Bono, Sid Vicious and two even nastier pieces of work, John Wilkes Booth and Mark David Chapman. His mother was a hairdresser with her own business and his father worked in a local refinery which pours filth into the sky over the Mersey to this day. They married young and James was their first child. He has two younger brothers and a still-expanding family in the area. As an Everton fan he suffered years of Liverpool success throughout the seventies and was thrilled when his father took a job in Singapore and the family moved lock, stock and two smoking barrels to Asia. He spent five fine years growing up in the city state before returning to the rain, storms, comprehensive schools and desolate beauty of the Scottish east coast. Later years took he and his family to baking hot Muscat, in Oman, and a Syria that has since been bombed off the surface of the planet. James studied journalism in London and later travelled through Ireland, France, Germany and India generally having a good time, before finally settling in Madrid, Spain, where he now lives with his wife and two children.


Do visit the other blog tour stops