Blog Tour ~ The Woman in the Shadows by Carol McGrath

Jaffareadstoo is delighted to host today's penultimate stop on

The Woman in the Shadows Blog Tour 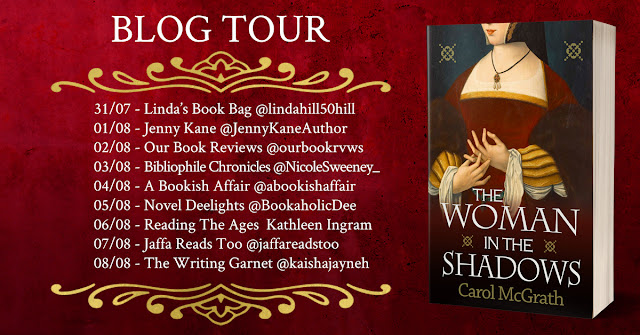 Hello Carol, I am delighted to welcome you to Jaffareadstoo today...


Hello Jo. You ask why I have chosen to tell Elizabeth Cromwell’s story and if I found out anything surprising about Elizabeth or about Tudor women. 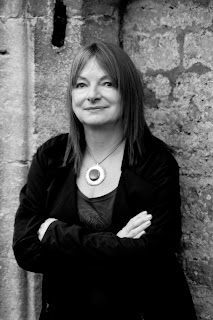 I have always been fascinated by stories that have not yet been told by writers of historical fiction. I am interested in female perspectives on Historical events and personalities. Historical women are shadowy. Unless a woman was very important they remain, during this period, unrecorded. Of course, when you are writing Historical Fiction about lesser known personalities, you may have no idea about how your protagonist looked or what she said or thought and a writer must use her imagination to put flesh on the historical skeleton.

I had several objectives in this novel. I found Thomas Cromwell intriguing and I wondered if looking at his marriage could permit a sideways glance at his life before he rose to power.  I hoped to show him as a family man. What was it like to be married to such a man? Moreover, writing about Elizabeth has permitted me to focus on the Tudor world as it might have been for a Tudor woman from the wealthy merchant class. It is recorded fact that Elizabeth’s father was involved in the cloth trade. It is historical fact that she had been a young widow before her marriage to Thomas Cromwell. I was curious as to why she was widowed so young. Since historians really do not know, that part of my investigation and story line permitted me, as a writer of Historical Fiction, plausible speculation.

Therefore, for me as a novelist, the first surprising discovery about Elizabeth concerns her first marriage to Tom Williams. I strongly suspected that his family, like hers, was connected with the cloth industry. However, he also was recorded as having been Yeoman of the Guard. That fact could have been a misinterpretation as it is just a mention and the word ‘yeoman’ can suggest ‘freeman’. I went with the former, exploring why he might have died and why, considering she had three children with Thomas Cromwell, she had none with her first husband. Of course, there could be alternative answers to this query.

Tudor women often inherited husband’s businesses and could live lives independent of men. Many acquired success and wealth. They employed apprentices and participated in gilds where they often faced male jealousy, and could not take on high office within the gild. I discovered enough evidence to suggest that Thomas Cromwell trusted family and close friends in the city. They were humanists who pursued new learning. Elizabeth was highly respected by his friends. I suspect that she, too, had had an education. Women had enough learning to at least manage household accounts. The Cromwells accumulated wealth and by 1523/4 had purchased a home in a choice neighbourhood beside The Austin Friary.

Researching and writing this story involved an investigation that yielded many intriguing and fascinating discoveries. I hope your readers enjoy it as much as I enjoyed writing it.

When beautiful cloth merchant's daughter Elizabeth Williams is widowed at the age of twenty-two, she is determined to make herself a success in the business she has learned from her father. But there are those who oppose a woman making her own way in the world, and soon Elizabeth realises she may have some powerful enemies - enemies who also know the truth about her late husband..

Security and happiness comes when Elizabeth is introduced to kindly, ambitious merchant turned lawyer, Thomas Cromwell. Their marriage is one based on mutual love and respect...but it isn't always easy being the wife of an influential, headstrong man in Henry VIII s London. The city is filled with ruthless people and strange delights and Elizabeth realises she must adjust to the life she has chosen...or risk losing everything.

Thank you to Jaffa Reads Too for hosting this hop on my Blog Tour for The Woman in the Shadows. 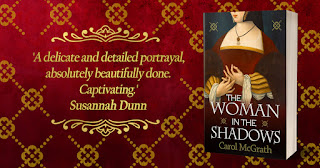 Carol McGrath has an MA in Creative Writing from The Seamus Heaney Centre, Queens University Belfast, followed by an MPhil in Creative Writing from University of London. The Handfasted Wife, first in a trilogy about the royal women of 1066 was shortlisted for the RoNAs in 2014. The Swan-Daughter and The Betrothed Sister complete this best-selling trilogy. The Woman in the Shadows, a novel that considers Henry VIII’s statesman, Thomas Cromwell, through the eyes of Elizabeth his wife, will be published on August 4th, 2017. Carol is working on a new medieval Trilogy, The Rose Trilogy, set in the High Middle Ages.  It subject matter is three linked medieval queens, sometimes considered ‘She Wolves’. She speaks at events and conferences on the subject of medieval women, writing Historical Fiction, The Bayeux Tapestry, and Fabrics, Tapestry and Embroidery as incorporated into fiction. Carol was the co-ordinator of the Historical Novels Association Conference, Oxford in September 2016 and reviews for the HNS.

Find Carol on the following :

Huge thanks to the author for inviting me to be part of this blog tour and to Kate at Accent Press for my copy of The Woman in the Shadows.