Blog Tour~ The Way Back to Us by Kay Langdale 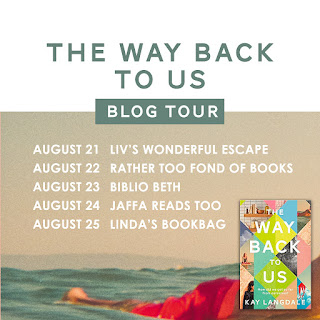 Kay Langdale’s new novel explores how a marriage can fracture - ‘the conscientious ploughing of furrows and then the lifting of heads to see, with mild surprise, a pathway of completely opposing directions.’

Anna and Tom have two young children, Isaac and Teddy. When Teddy, aged one, is diagnosed with a life limiting illness, Anna devotes herself to caring for him full time while Tom becomes increasingly absorbed in his career.

Motherhood for Anna quickly becomes a state of siege; with Teddy requiring constant vigilance and what seems like an army of health workers scrutinising her every move. Swamped by her responsibilities, and unable to acknowledge the impact that Teddy’s diagnosis has had on her personally, the first casualty of the situation is her marriage. The second is Isaac, who, watchful and sensitive, regards his mother and his brother with an equally solicitous eye.

With Tom increasingly finding himself marginalised and inadequate, he and Anna reach a point when neither of them is able truthfully to say what they think or feel. And, captivated by the sunny vivacity of his work colleague Eliza, Tom begins to question whether having a very ill child makes considering leaving a marriage more morally culpable.

It is only when Anna realises the danger her marriage is in that she is forced to process the impact that Teddy’s diagnosis has had upon her, and Tom has to recognise his share of the blame.

In The Way Back to Us, Anna and Tom are faced with very particular, amplified circumstances in a novel which, at heart, explores the complexities of modern marriage and parenting.

Modern marriage and parenting is the focus for this first person narrative driven novel which explores how living with a child with a profound disability can have a devastating effect on a marriage, especially when that child's life limiting disease completely takes over family life. Meeting with Tom and Anna and their children Isaac and Teddy shines a spotlight on this difficult subject.

Gradually we meet all four characters in the novel, who in their own words explain just what is going on in their lives. I found this way of telling the story particularly interesting and especially looked forward to Teddy's narrative which brought to poignant life the difficulties he experienced, and how he coped with living in his own limited way. I felt really sorry for Tom and Isaac who, so often, seemed to be floundering, no longer the focus of Anna's attention as all her energy went into keeping Teddy safe from harm.

The Way Back to Us highlights in a very readable way the struggles and difficulties families face on a daily basis when all too often they are fighting a system which hinders more than it helps. There is no doubt that Anna is Teddy's champion, battling for him every single step of the way but at what cost to her own well being and that of her marriage. She struggles to cope but feels that she can't back off for a single second because if she does Teddy will suffer. I think for me one of the saddest sentences came towards the end of the novel  when Anna admitted to her husband, Tom, that, "I can no longer see where Teddy stops and I begin..."

The Way back to Us is a powerful and poignant story which tackles a sensitive and difficult subject. It’s a story which will resonate with anyone who has a child with a disability or life limiting disease but, I think that it will also act as a timely reminder to the rest of us to never make assumptions because we never truly know what's going on in other people's lives or indeed of how we would cope in similar circumstances.


Kay Langdale is the author of five novels: Away From You, Choose Me, Her Giant Octopus Moment, What the Heart Knows (Rowohlt, Germany) and Redemption (Transita; published as If Not Love by Thomas Dunne Books.
She taught twentieth century literature at St. Edmund Hall, Oxford and worked as a copywriter in a brand development consultancy. She is married, has four grown-up children and lives in Oxfordshire

The Way Back to Us.