I was born in Crosby in the late 1950s but don’t remember much before the age of three. We moved away when I was seven and returned to Thornton when I was 13, about a mile away from Crosby, but I see those as two very different phases of my life. Crosby very much associated with my childhood and Thornton with my teenage years and growing into adulthood.

Of course, Beatlemania was happening in my living memory in Liverpool in the early 60s. I was just a tot, though one of my earliest memories is of singing ‘She Loves You’, and ‘Eleanor Rigby’ not only makes reference to our family name but its haunting strings and poignant lyrics evoke strong memories of our last few months in Crosby! It evokes childhood angst on autumn Sunday evenings, tied up with Evensong at St Faith’s High Church, and the fear of school the following day. My teacher put the fear of God into me with a perishing look of her eye and a stern presence. It’s hardly surprising then, that moving away to the Cotswolds, seemed to my young mind, like an adventure and a great escape!

But during those early years at Crosby, some of the most striking memories are in relation to the landscape and the shore. When we ventured down there as a family, we took our buckets and spades and had a paddle, though the tide was often a long way out, but there were dollops of oil coated in sand across Hall Road beach - deposits from passing tankers no doubt.


Sometimes we would venture further afield to New Brighton or Freshfields. We’d do the interminable walk through the pine woods at Freshfields (or so it seemed to my little legs) with red squirrels delighting us along the way, before coming out to rock pools and dunes with long grassy clumps where caterpillars uncurled while we crunched our sandy sandwiches.

But when we returned to Thornton in the early 1970s, it seemed like a backward step and so Crosby was avoided where possible. We (that is me and my sister closest to me in age) were soon venturing regularly into town (Liverpool city centre). That was the place to be. For the size of it, Crosby didn’t offer much for the young who’d outgrown youth clubs.


So it was with a certain amount of incredulity, when, some thirty odd years later, I heard Crosby was the chosen place for Antony Gormley’s ‘Another Place’ exhibition. His 100 iron men became a permanent fixture, putting Crosby well and truly on the map. I last returned to Crosby in 2009 for a trip down Memory Lane and to see the Iron Men. It is quite an experience and Crosby beach, cleaned of oil, is still unspoiled. 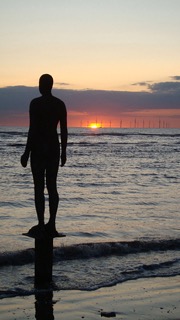 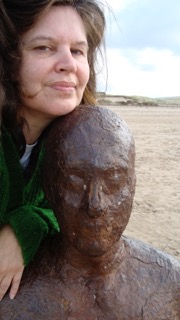 One of the Iron Men in a Waterloo sunset, and me resting my head on an an Iron Man


Naturally all these early experiences on Merseyside have had a big influence on my writing. My first novel ‘Did You Whisper back?’ was written when I was still living in Thornton. It’s about a young woman who slowly descends into mental illness and is largely set in Blundellsands and Waterloo, with many references to Liverpool and Seaforth in a 1970s setting. It won a Southern Arts Bursary in 1991 under its previous title (Where A Shadow Played).


However, the book of mine that is most influenced by my early life in Crosby and Liverpool is ‘Suckers n Scallies’(previously published in paperback as Sucka! by Skrev). It begins in the 1960s, moving through the 70s and 80s, interweaved with present day (1990s in this case). It’s a gritty story with lots of Scouse dialect and retro sweets and is about a life long friendship between two men from different backgrounds, beginning in 1960s Liverpool when they are children. It’s a bit of a marmite book as there are a lot of time and viewpoint shifts but these are clearly marked with sub-headings. There are no actual references to Crosby as such, but rather north Liverpool, and also Kirkby. References to Terry’s grandpa painting ships in his blood came from a similar story about my own great grandfather. My father also painted the docks in the 1970s/early 80s.


My very short novella ‘She Looks Pale’ is also set in Liverpool and has references to Waterloo Park school in the 1970s. In fact the title is taken from a schoolgirl ritual we used to do in lunch hours! It is quite a sad and poignant tale, however, about a child confined to the house by her over-protective parents, until her only view of the world is through diaries and photo albums of her mother’s past. It is an e-book in its own right but also fronts a short story collection of mine in paperback. ‘She Looks Pale & Other Stories’. 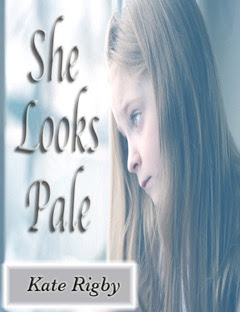 ‘Our Marie’ is about generational differences and conflicts between a mother and her daughter, and is also available in the e-collection of short stories ‘Tales By Kindlelight’.

Liverpool is also referenced in some of my other books and short stories, for instance, the Freshfields walk makes a brief appearance in The Dead Club and the novel I’m working on at the moment has the main character from Crosby, although she now lives in Devon! I think that’s called coming full circle as that’s where I live now. I am hoping to write something autobiographical in the future so Crosby will definitely feature again.

Many thanks to Jo – and Jaffa! - for inviting me to be a guest on your blog.

Warmest thanks to Kate for sharing her thoughts about growing up in Crosby and of how her childhood in Liverpool has shaped her stories.