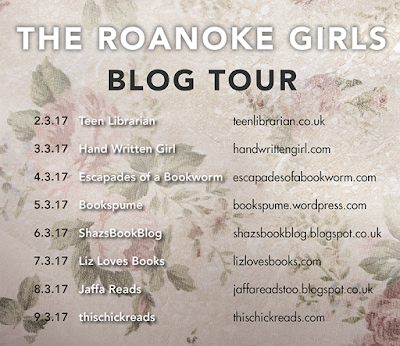 Beautiful
Rich
Mysterious
Everyone wants to be a Roanoke Girl

Oh, what a tangled web we weave...

Leaving Los Angeles with barely enough money for the journey and with a head full of memories, Lane Roanoke heads back to Osage Flats and to Roanoke, her grandparent's home in rural Kansas. Her cousin, Allegra is missing and despite an absence of many years, Lane feels the pull of Roanoke and of the family secrets that creep and claw around her like a spider’s web.

This is only the second time that Lane has returned to Roanoke; the first time she was a young teenager barely functioning after her mother’s death.  However, her recollections of the warmth of Allegra’s welcome and of her difficult relationship with her grandparents, Yates and Lilian, make Lane determined, despite the uncomfortable prospect of reawakening old and painful memories, to discover Allegra’s whereabouts.

Roanoke is a place where nothing moves forward and yet, even after an absence of many years, Lane still feels an emotional attachment to both the place and its people. Slipping effortlessly forwards and backwards in time, Lane’s past, and also that of the Roanoke girls is revealed in startling detail. The narrative cleverly exposes a whole heap of family secrets which have been hidden for far too long, and which, inevitably must be revealed before life, especially for Lane, can begin to be put right.

So much goes on behind the rural façade of Roanoke that it is difficult to know where to start without giving too much of the entire plot away, so I won’t breathe a word more, except to say that this is probably one of the best coming of age/ family dramas that I have read in a long, long time. The story gets right under your skin, leaves you breathless with disbelief, and makes you want to read on and on until the Roanoke Girls have told their exceptional story.

The Roanoke Girls is a complex and, at times, uncomfortable dissection of a dysfunctional family who have learned, over time, to keep their secrets hidden and their enemies silent.

Amy is the author of the young adult series The Book of Ivy. A former criminal defense attorney, she lives in Missouri with her family. The Roanoke Girls is her first novel for adults.

My thanks to Jenni at Hodder for her invitation to be part of this Blog Tour.