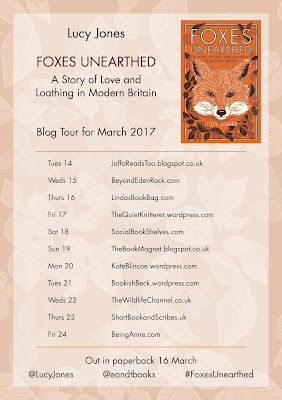 I'm thrilled to welcome the author, Lucy Jones to the blog
to share some of her favourite Foxy Facts with us

The fox weaves into our language in myriad ways. Most fox-related words relate to the animal’s supposed artfulness or craftiness. ‘Foxly’ was used to mean cunning as long ago as the twelfth century. However, there are more than a handful of neutral fox words that are devoid of the predatory meaning. My favourite is “foxes brewings”, which means ‘a mist which rolls among the trees on the escarpment of the Downs in unsettled weather.’

The most shocking thing I discovered while researching Foxes Unearthed was the sport of fox-tossing. It sounds fictional but in the 17th and 18th centuries European aristocratic couples would gather in courtyards to play what must be one of the most barbaric sports in history. The fox was tossed into the air using two sticks and a piece of cloth and the highest flung animal would win the contest. If that’s not bad enough, on nights of masked balls, the fox would also be dressed up in costume. Unsurprisingly, it was usually fatal.

Foxes are supreme examples of evolution. They are brilliant predators, hence how widespread Vulpes vulpes is across the globe. In particular, their eyesight is incredible. You know that glow that foxes, and other mammals, have in their eyes when they’re caught in headlights? That’s because of the tapetum lucidum, a layer of light-sensitive cells that allows animals that have it to see in the dark. Handy for catching mice in the woods at night.

The fox playing dead is an old yarn. It seems unlikely, but in January 2016, the ruse was caught on film. Siberian hunters came across what appeared to be a dead Arctic fox, trapped in a snare. The video shows the fox being manhandled as they remove the snare. It looks utterly dead. But when the hunters place the body in a box, the fox bursts out and scrambles across the snow for its life. An incredible sight (and it doesn’t look faked)

Before I wrote Foxes Unearthed, much of what I thought about the social groupings and relationships of foxes was learned from the 1990s television adaptation of Colin Dann’s The Animals Of Farthing Wood. I assumed foxes lived in pairs with their cubs. In fact, the more we learn about foxes, the more complex their societies seems to be. For example, a group of foxes will often include a barren vixen who helps the matriarch vixen look after the cubs. She may be a sister or a cousin but her role is crucial in helping bringing up the wee foxes until they’re old enough to disperse. 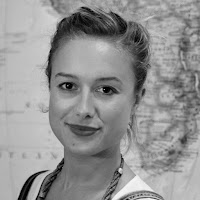 Lucy Jones writes mainly about culture, nature, music, science, wildlife and the environment. She was Deputy Editor at NME.com and previously worked at The Daily Telegraph. She is the recipient of the Society of Authors' Roger Deakin Award for Foxes Unearthed.
You can find Lucy on her Website