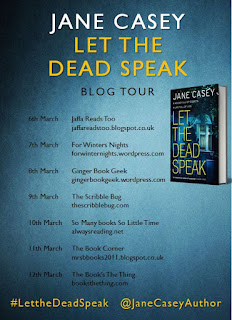 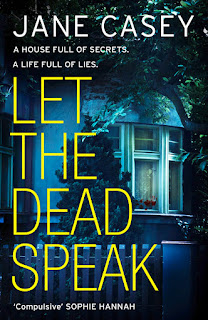 Eighteen-year-old Chloe Emery returns to her West London home to find Kate, her mother, missing and the house covered in blood. There may not be a body, but everything else points to murder.

Maeve Kerrigan is young, ambitious and determined to prove she’s up to her new role as detective sergeant. In the absence of a body, she and maverick detective Josh Derwent turn their attention to the neighbours. The ultra-religious Norrises are acting suspiciously; their teenage daughter definitely has something to hide. Then there’s William Turner, once accused of stabbing a schoolmate and the neighbourhood’s favourite criminal. Is he merely a scapegoat or is there more behind the charismatic façade? As the accusations fly, Maeve must piece together a patchwork of conflicting testimonies, none of which quite add up. Who is lying, who is not? The answer could lead them to the truth about Kate Emery, and save the life of someone else.

It's no spoiler to say that when Chloe Emery returns home after a weekend visit to her father she finds, not just, her house in complete disarray, but also that her mother is missing, and there is unsettling evidence throughout the house of a violent crime. When DS Maeve Kerrigan, DI Josh Derwent and the rest of the investigative team arrive on the scene, Chloe is being looked after by her neighbours and when questioned can't give the police much in the way of clues as to why her mother would either be missing or harmed. And yet, even without a body, there is enough evidence to suggest to the police that a murder has taken place

What then follows is a tense and twisty psychological thriller which grabs your attention from the very beginning and which never lets up until the whole story is concluded. What I love about this author's writing is that even though this is now book number seven in the series, each book feels as fresh and bright as a daisy. There is the usual edgy banter between Kerrigan and Derwent, who it must be said are an investigative duo made in crime heaven, and who continue to bring out both the worst and, occasionally, the best in each other. Add to the mix a rookie DC who gets right on Kerrigan's nerves and you have all the perfect ingredients for a brilliantly investigated crime story.

So good is the writing in Let the Dead Speak that I became so involved in the plot that I didn’t want to put the book down for a single second, so I carried the book from room to room, snatching minutes here and seconds there, always trying to stay one step ahead of the action. But, as always, this clever author kept me guessing right until the very last sentence and the dénouement when it comes is every bit as tense and exciting as I hoped it would be.

As with any of the books in the Kerrigan series all can be read as standalones, although in order to pick up the subtle, and not so subtle, banter between the lead characters, it's best that you start at the beginning  with The Burning and treat yourself to some very, very good crime stories.

There is no doubt at all that Let the Dead Speak is a compellingly realistic psychological thriller from a crime author who is at the very top of her game. 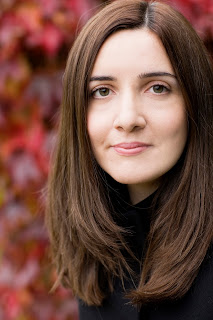 Crime is a family affair for Jane Casey. Married to a criminal barrister, she has a unique insight into the brutal underbelly of urban life, from the smell of a police cell to the darkest motives of a serial killer.This gritty realism has made her books international bestsellers and critical successes; while Detective Maeve Kerrigan has quickly become one of the most popular characters in crime fiction.

Winner of the Mary Higgins Clark Award for THE STRANGER YOU KNOW, Jane has previously won the Irish Crime Novel of the Year Award and was longlisted for the CWA Dagger in the Library Award. 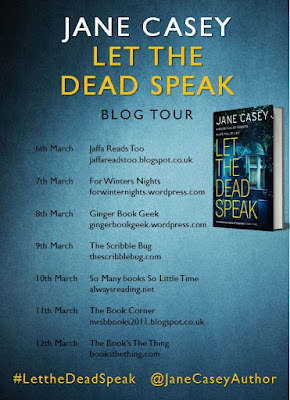 My thanks to Felicity at Harper Collins for her invitation to be part of this blog tour.