Blog Tour ~ The Girl in the Painting by Kirsty Ferry 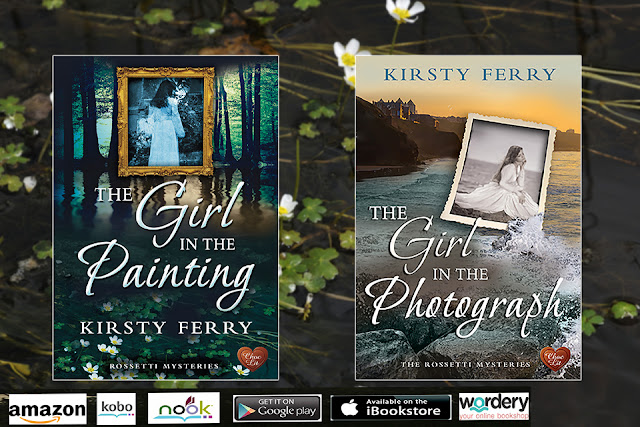 A discovery at the V & A Gallery: The Girl in the Painting by Kirsty Ferry

Thank you so much for letting me come onto your blog. What I thought I’d do, is chat about some of facts behind The Girl in the Painting. The book is the second in the Rossetti Mysteries series, and immerses us in the world of the Pre-Raphaelite Brotherhood, thanks to a timeslip caused by a haunted diary.

Dante Gabriel Rossetti, one of the main people I fictionalised in the historical part of the book, was one of the founding members of the Pre-Raphaelite Brotherhood, a group of Victorian artists who were quite rebellious in the way they wanted to portray art.

Rossetti fell in love with Lizzie Siddal, a red-headed beauty plucked from her work in a milliner’s shop and catapulted into fame as one of the most famous Pre-Raphaelite models – some people say she was, in fact, the first supermodel; and she definitely became a celebrity of her time. I also fictionalised her in The Girl in the Painting, and it was intriguing to trace Dante and Lizzie’s relationship and wonder at the psychology, almost, behind it. Lizzie and Rossetti had what some might say was an obsessive relationship; but it was certainly passionate, and, quite possibly mutually dependent. Rossetti, however, did have a penchant for falling in lust with redheads, and many of his paintings depict them. However, one notable exception was Jane Morris, the wife of his good friend William Morris, who had long, dark hair.

Rossetti also fell for Jane, and they were lovers from about 1865 until 1894 (Lizzie died in 1862, so this relationship, at least, didn’t seem to be one of his numerous affairs!). Anyway, a couple of weeks before The Girl in the Painting was published in paperback, I visited the Victoria and Albert Museum in London. My intention was solely to see the clothes – I love historical fashion and one of the first things I do when I’m researching a book is to search for clothing my characters can wear, then put the resulting images on my Pinterest board so I can look back at them. To get to some of the V & A galleries I wanted to see, I had to go through the paintings and I scurried through the first couple of rooms as we were quite time-limited (my husband and son had almost agreed to go there on sufferance, so long as we did the Science Museum and the Natural History Museum afterwards!). I rounded a corner in the paintings gallery and had to admit I let out a yelp of delight. Fortunately, we were the only people in that particular room, or I might well have been escorted off the premises! Right in front of me, was a huge portrait of Jane Morris – and in gold block lettering on the bottom was the legend Dante Gabriel Rossetti. The picture in question was The Day-Dream, and even my husband was quite impressed. My son was still focused on space shuttles and dinosaurs, but never mind.

The only thing that would have been better (and no disrespect to Jane Morris!) was if I’d seen a picture of Lizzie Siddal. Lizzie plays a huge part in The Girl in the Painting, and the painting in the book is Ophelia, by John Millais. It was after Millais painted Ophelia that Rossetti declared Lizzie could model only for him in the future. It’s a shame that Dante, though, was allowed to be all lax with his affections and chase after other famous ‘model’ redheads such as Fanny Cornforth – but I guess if he was dull and boring, there would be no story there to develop in my book. And there would certainly not have been a chance that Rossetti might have fallen for another redheaded beauty during his relationship with Lizzie – that redhead is Daisy Ashford, the girl who wrote the diary in The Girl in the Painting, and the girl who, so many years after her death, is desperate for people to know the truth about her life with the Pre-Raphaelite Brotherhood…

Kirsty is from the North East of England and won the English Heritage/Belsay Hall National Creative Writing competition in 2009 with the ghostly tale Enchantment. She has also written North East based novels, short stories and articles for magazines such as Weekly News, Peoples Friend, Ghost Voices and It’s Fate.

Her timeslip novel, Some Veil Did Fall, a paranormal romance set in Whitby, was published by Choc Lit in Autumn 2014. This was followed by another Choc Lit timeslip, The Girl in the Painting in February 2016 and The Girl in the Photograph in March 2017. The experience of signing Some Veil Did Fall in a quirky bookshop in the midst of Goth Weekend in Whitby, dressed as a recently undead person was one of the highlights of her writing career so far!

Kirsty’s day-job involves sharing a Georgian building with an eclectic collection of ghosts – which can sometimes prove rather interesting.


And here's some more about the Books

The Girl in the Painting

What if you thought you knew a secret that could change history?

Whilst standing engrossed in her favourite Pre-Raphaelite painting - Millais's Ophelia - Cori catches the eye of Tate gallery worker, Simon, who is immediately struck by her resemblance to the red-haired beauty in the famous artwork.

The attraction is mutual, but Cori has other things on her mind. She has recently acquired the diary of Daisy, a Victorian woman with a shocking secret. As Cori reads, it soon becomes apparent that Daisy will stop at nothing to be heard, even outside of the pages of her diary ..
.
Will Simon stick around when life becomes increasingly spooky for Cori, as she moves ever closer to uncovering the truth about Daisy's connection to the girl in her favourite painting?

The Girl in the Photograph

What if the past was trying to teach you a lesson?

Staying alone in the shadow of an abandoned manor house in Yorkshire would be madness to some, but art enthusiast Lissy de Luca can’t wait. Lissy has her reasons for seeking isolation, and she wants to study the Staithes Group – an artists’ commune active at the turn of the twentieth century.
Lissy is fascinated by the imposing Sea Scarr Hall – but the deeper she delves, the stranger things get. A lonely figure patrols the cove at night, whilst a hidden painting leads to a chilling realisation. And then there’s the photograph of the girl; so beautiful she could be a mermaid … and so familiar.
As Lissy further immerses herself, she comes to an eerie conclusion: The occupants of Sea Scarr Hall are long gone, but they have a message for her – and they’re going to make sure she gets it.


Buy The Girl in the Painting: www.choc-lit.com/dd-product/the-girl-in-the-painting/

Buy The Girl in the Photograph: www.choc-lit.com/dd-product/the-girl-in-the-photograph/

Huge thanks to Kirsty for being my guest today and also to Choc Lit for the kind invitation to be part of the blog tour today.