Review ~ Behind her Eyes by Sarah Pinborough

David and Adele seem like the ideal pair. He's a successful psychiatrist, she is his picture-perfect wife who adores him. But why is he so controlling? And why is she keeping things hidden?

As Louise, David's new secretary, is drawn into their world, she uncovers more puzzling questions than answers. The only thing that is crystal clear is that something in this marriage is very, very wrong. But Louise can't guess how wrong – and how far someone might go to protect their marriage's secrets.

There's been a lot of hype around this book which came out in late January and whilst I'm a little bit late to the party I can sort of see what all the fuss was about, although there's a little bit of me that was ever so slightly disappointed by that ending.  However, that could just be because I read so many books in this genre that nothing really surprises me too much, but I have to admit that I did guess the ending before it came along, so the hastag #WTFthatending has, I'm afraid, been lost a little bit on me.

Still, I digress, back the story of the relationship triangle between psychiatrist,Oliver, his damaged wife, Adele and David's secretary, Louise. Really, this trio should have nothing in common, the three lives should never have had any real need to come together in the way that they did, but then the fickle finger of fate intervened, and that's when the trouble really started.

As David's secretary, Louise should have been content to keep his diary and manage his appointments but a chance encounter with David before he became her new boss meant that they already had personal history together. By far the most compelling character in this menage a trois is the very beautiful but, oh so vulnerable, Adele, who entices and snares Louise into a situation which develops into something which, if I say more, will start to give the game away... so I won't say another word..

I thought that the book was an interesting look at the lengths that people will go to in order to maintain utter control, whilst at the same time keeping a facade of relative normality. It was scary and deeply troubling and yet, there were also parts of the story where I , sort of,  had to suspend belief and go ..no way jose... but then that's what fiction is all about. It takes you to places beyond the ordinary and leads you into situations where you really wouldn't want to go, even in your wildest dreams.

I think Behind her Eyes would translate really well to the screen and I could see that it would make a clever TV drama or movie.. 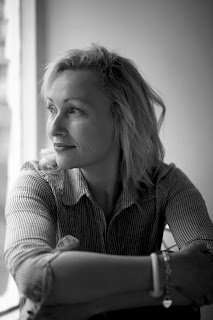 Sarah Pinborough is an award winning YA and adult novelist and screenwriter. She's written for the BBC and her last YA thriller 13 minutes has been optioned by Netflix and is in development.

My thanks to Jaime at Harper Collins for my review copy of this book.
Posted by Jaffareadstoo..... at 01:00