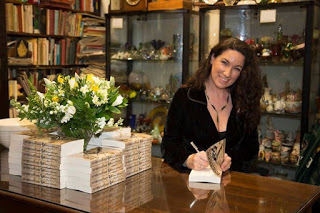 Hi Kirsten, a warm welcome back to Jaffareadstoo and thank you for spending time with us today...

How have things been for you since you were last on the blog ?

If you’d suggested in January 2013 that I’d be typing this up as part of my new role as a full time author, I would probably have laughed hysterically. But it’s amazing how life changes once the desire is there, and following hard work.

In January 2013 I started writing my first novel, Fifteen Postcards, a historical fiction book loosely based on my family’s antique shop, with a dash of Dickens’ The Old Curiosity Shop thrown in. It was published in 2015 by Accent Press, a UK based publisher.

After the success of Fifteen Postcards, I started on its sequel, The Last Letter. Initially I thought writing a second book was going to be a doddle, as easy as pie. I had my systems in place, research was streamlined, reference books stood proudly on my bookcase a short stretch away. It was anything but easy. There was a mantle of expectation hadn’t existed with the first book. Would it be as well received as the first or was I trying to stretch my knowledge too far?


But writing The Last Letter was also like visiting an old friend - my characters seemed to have missed me and they had matured. I’d had one review for Fifteen Postcards where the reviewer had called my protagonist a bubble-head, and you know what? She was right, and that really helped me develop Sarah Lester further. Reviewers are great!

Almost all the reviews for Fifteen Postcards mention the research which must have gone into the book, and they’re right. The research for The Last Letter was no different. You end up down a two hour rabbit hole on the internet researching Victorian hearth tiles, or hats from 1860 worn by ladies in India. I’ve learnt so much, and ended up incorporating things I never imagined I’d write about because of those hours lost in the Internet. Writing can be a lonely occupation, but Twitter has been a remarkably social tool - I’ve found that people on Twitter love to help. Often I’d pose a question along the lines of “How long would it take to walk from Manse Street to High Street?”, and then an discussion would erupt online as various people questioned the answers given by others and offered their own opinions. Highly entertaining and it made me feel part of something greater than me just sitting at my desk by myself. I love Twitter and I’m very enthusiastic there, and probably a little too outspoken about some aspects of life in general.

My first book took eighteen months to write, the second took twelve but the process after writing it was that much more complicated and time consuming than with the first. The cover of The Last Letter went backwards and forwards between the publisher and I, the release date needed to be agreed upon, the pricing of the first book at the release of the second. Even the editing process seemed more complex because I’d had the previous experience to compare it with. With Fifteen Postcards I was such a novice that I stumbled through everything blindly, and to my utmost surprise, it ended well.

And now The Last Letter is out there and doing well. And I quit my day job as an Antique Dealer. A leap of faith greater than writing the first, or even the second book, and one which is paying off. 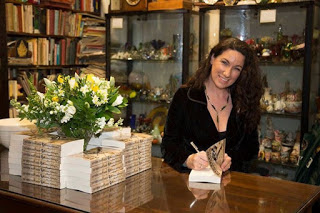 Kirsten is currently working on her third book, 'The Ruination Of Art', set in the magical city of Florence, Italy. She lives in Auckland with her husband and two daughters, and a doddery old cat.


Huge thanks to Kirsten for sharing her time with us today.

hearing all about 'The Ruination of Art'