A chillingly unsettling psychological thriller, perfect for fans of Paula Hawkins, Liane Moriarty , Shari Lapena and Clare Macintosh. Are you ready to question if everything in your life is really as it seems…
She thought they had a perfect marriage.
When a plane crashes, Iris Griffiths watches the news unfold with horrorand then relief. Her beloved husband Will had just flown out from the same airport, but he was on a different flight.

So why is his name on the list of victims?
Surely there’s some mistake her husband would never lie to her. Would he? But wading deeper into the truth of her husband’s deception, Iris begins to think the unthinkable.

My Thoughts about the book...

It's really difficult to imagine just what it would be like if you heard on the news that a plane had crashed, and to have a huge sense of relief wash over you when you realise that your husband was on a different flight, only to have then have the stuffing knocked out of you when your husband's name appears on the list of passengers from the crashed plane. For Iris Griffiths this becomes the frightening reality which is only superceded by the fact that her husband Will lied to her for a host of complicated reasons. These reasons become apparent in this tightly knit suspense story which grabs your attention from the start and which doesn't let up until the story is concluded.

Rather like the book action, I raced through this at high speed. Believe me, it's one of those stories that will leave you gasping in places, stunned into disbelief about what is unfurling on the page.

The author writes well and controls the narrative with a fine eye for detail. She makes her characters believable, I especially like Iris and found her family, particularly her twin brother Dave, to be very supportive and huge comfort to her. It really is a nightmare scenario that Iris finds herself in and I can't say much more as that would give away huge spoilers but what I can say is that ti thought that the story was really well explored. The twists and turns were a genuine surprise to me and I liked never quite knowing where the story would go next or indeed who I could trust to be telling me the truth.

If you enjoy psychological suspense stories that will leave you feeling like you have been through a roller coaster of emotions then do give this one a try. It's a great read from start to finish.

Best Read With ...A bag of savory snacks and a large take-out filter coffee.. 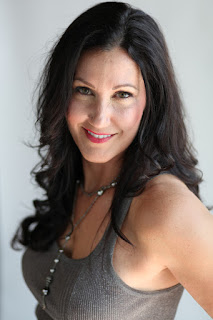 Kimberly Belle grew up in Eastern Tennessee, in a small town nestled in the foothills of the Appalachians. A graduate of Agnes Scott College in Decatur, Georgia, Kimberly lived for over a decade in the Netherlands and has worked in marketing and fundraising for various nonprofits. She’s the author of two novels, THE LAST BREATH and THE ONES WE TRUST (August 2015). She divides her time between Atlanta and Amsterdam.