Jaffareadstoo is delighted to be hosting today's stop on the 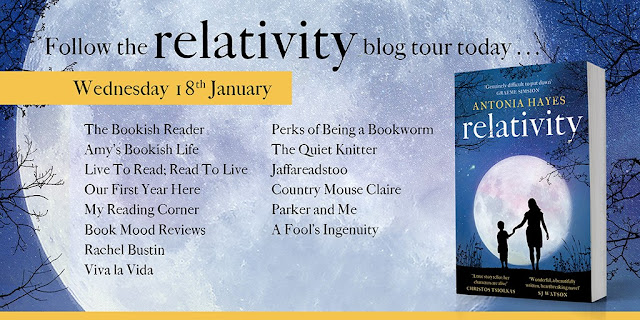 Ethan is an exceptionally gifted young boy, obsessed with physics and astronomy.
His single mother Claire is fiercely protective of her brilliant, vulnerable son. But she can’t shield him forever from learning the truth about what happened to him when he was a baby; why Mark had to leave them all those years ago.
Now age twelve, Ethan is increasingly curious about his past, especially his father’s absence in his life. When he intercepts a letter to Claire from Mark, he opens a lifetime of feelings that, like gravity, will pull the three together again.

Relativity is a tender and triumphant story about unbreakable bonds, irreversible acts, and testing the limits of love and forgiveness.

Twelve year old Ethan is remarkably gifted. His knowledge of particle physics and the universe far exceeds his age limit. However, life is never going to be easy for Ethan or for his single mother Claire especially in light of a tragedy that happened when Ethan was just a baby. What actually happened to cause this tragedy is explained in the course of the story which is sympathetically told in three viewpoints, namely that of Ethan, Claire, and Mark, Ethan's father and Claire's estranged husband.

The individual voices of these three very different narrators are incredibly strong but each is no less compelling and as their individual stories start to unfold therein lies the strength of the novel which looks at the very minutiae of life and dissects just how tragic misfortune can either shape us, or make us.

Ethan's story is a joy to read, his twelve year old self just on the cusp of adolescence is beautifully described, as is his overwhelming knowledge of physics. I expected to be bamboozled by some of Ethan's theories but the author does a really good job of explaining just how a gifted twelve year old would see the universe rather than, perhaps the more complicated way that Mark, his particle physicist father, would view events.

Relativity is an exceptionally good first novel, taking what could so easily have been a subject filled with angst and despair but this talented author turns it into a story filled with hope and goodness and the joy of simply being alive in a world which seems to get ever more complicated

I am always intrigued by the choice of a one word book title so much so  I looked up the definition of relativity and found Einstein's theory that states that..

"..all motion must be defined relative to a frame of reference and that space and time are relative, rather than absolute concepts: it consists of two principal parts .. "

Ok, so not having a particular penchant for physics I am perhaps no wiser however, what I am sure of is that this incredibly well written novel eventually allows you understand just how important everyone is in the scheme of things, and of how that in the universe every single one of our actions has a greater effect in the long term.

Antonia Hayes, who grew up in Sydney and spent her twenties in Paris, currently lives in London with her husband and son. Relativity is her first novel.

My thanks to Clara at at Little Brown for the invitation to be part of this blog tour.