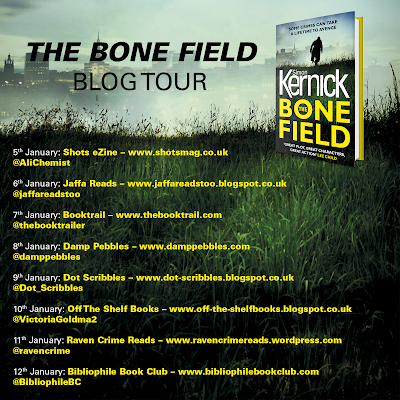 The Bone Field is a riveting new thriller which presents a terrifying world of corruption and deadly secrets, where murder is commonplace and nobody is safe.

When the bones of a young woman, Kitty Sinn, who went missing without trace in Thailand in 1990, are discovered in the grounds of a school just outside London, an enduring mystery takes on a whole new twist. Kitty's boyfriend at the time, and the man who reported her missing, comes forward to reveal to DI Ray Mason, of the Met's Homicide Command, that he knows what happened to Kitty and who killed her. But soon he too has been shot dead.

Now the only link to Kitty lies 500 miles away in the Bordeaux countryside where a middle-aged teacher, Charlotte Curtis, lives alone. But Charlotte is in terrible danger, she possesses a single piece of information that will blow Kitty's case wide open. What follows is a desperate hunt for that truth, and with the help of private investigator Tina Boyd, Ray is immersed in a twisted underworld of trafficking, exploitation and pure evil, unlike anything either of them have experienced before.

I  am really thrilled to be able to share this character profile for one of the lead characters in The Bone Field ~ Private Investigator Tina Boyd plays a pivotal role in the book.

2013 to present. Licensed private detective based out of Paddington, London.

Nicknamed The Black Widow, because of the way her colleagues in the police force had a way of dying around her, Tina Boyd has had a chequered career in the Metropolitan Police. On the one hand, she’s been directly involved in solving a number of high-profile cases, including the Emma Devern kidnapping (2008) and the Night Creeper serial killings (2010). And of the 39 major investigations she was a part of, or led, between 2001 and 2011, the clear-up rate was 100 percent, making her one of the most successful detectives the Met has ever seen. She’s also been wounded twice in the line of duty – once when she was held hostage by a wanted gangster, Trevor Murk, in 2004, and the second time when she was kidnapped and shot by a former IRA terrorist, Michael Killen (aka Hook). At the same time, Tina’s been the recipient of three separate bravery awards, so she’s not a woman to be trifled with.

However, controversy’s followed her round her whole career. She’s killed a total of four suspects (although the police only know about three of them). To add fuel to the fire one of those killings was carried out when she was a civilian. Because of the extenuating circumstances surrounding the killings, she’s always avoided prosecution, but is still the only officer in the history of the Met to have been fired and reinstated, not just once but twice. In 2013, she finally burned her bridges for the last time and left the Force to become a private detective.

For the last two years things have been comparatively quiet for Tina but, as The Bone Field starts, that’s all about to change.

My thoughts about The Bone Field...

The one thing always guaranteed with a Simon Kernick novel is that within the story there will never be a dull moment, and that most certainly applies to The Bone Field which starts in Thailand with the mysterious disappearance in 1990 of Kitty Sinn. The consequences of Kitty’s disappearance will infiltrate the rest of the story until what is uncovered is an underground web of lies and deceit which have deadly consequences,  not just for those who seek to cover their tracks, but also for those investigators who are hell bent on getting to grips with this complicated mystery.

The Bone Field is one of those intriguing novels that surreptitiously gets under your skin, so that you carry the story around with you, always trying to keep one step ahead of the action and at times unwilling to put the book down for fear of missing something. I enjoyed piecing all the clues together, and believe me there are many pieces of the puzzle to set into place. All is done with the author’s characteristic fine attention to detail and his clever ability to keep the action going at non-stop speed.

The start of any new series is a process of getting to know the characters who will form the backdrop for much of the action, and in this case we need to focus our attention on the lead investigator Ray Mason an enigmatic protagonist who has had more than his fair share of tragedy, but whose resilience and maverick approach to investigating guarantees that he will never take the easy route. His relationship with private investigator Tina Boyd is rather more complicated which makes it all the more interesting to figure out just where the story will take them as both are multifaceted individuals with their own complex agendas.

The Bone Field starts a new venture for the author as this is his first series of crime novels but with protagonists DI Ray Mason and PI Tina Boyd on board for the duration, I am sure that there will never, as I said at first, be a dull moment for either of them, or us !

My thanks to the author for providing this character profile and also to Sam at Penguin Random House for the invitation to be part of this blog tour.