Blog Tour ~ Tell Me A Lie by C J Carver

Jaffareadstoo is delighted to be hosting Day One of the

Tell Me A Lie Blog Tour


Tell me A lie is the second book in the Forrester and Davies series which started with Spare Me The Truth.

Here's what people are saying about Tell Me A  Lie..

‘A terrific page-turner. Heart-stopping action and a heroine with guile as well as guts.’ Harlan Coben

‘A fast and ingenious thriller that pits the brilliantly addictive Forrester and Davies against a tense and chillingly real Russian conspiracy. Even better, Tell Me a Lie combines all the excitement of spooks, fast cars, guns and helicopters with brave and compassionate female characters who all pass the Bechdel Test with flying colours! I'm full of admiration.’ Isabelle Grey

Publishing on the 12th January


I'm delighted to be able to share with you a tantalising extract from Tell Me A Lie...

Edik Yesikov listened to the tape with increasing disbelief. He forgot all about his guests milling in the gun room, the snow wolf hunt he’d organised, the fact they only had four hours or so to bag their trophies before the sun set. If what he’d heard was true, it was fantastic news.

‘It’s been verified?’ he asked.

The Director of the FSK, the Federal Counterintelligence Service of Russia, glanced at Edik’s father, who nodded. As usual, the power in the room was held by the old man, who had flown with the Director straight to the hunting lodge from Moscow this morning. Lazar Yesikov hadn’t wanted anyone overhearing what he had to say.

‘The British journalist says she heard it from Polina Calder directly,’ his father said. ‘I see no reason to doubt her.’

Edik felt a moment’s alarm. ‘We haven’t kept her here, have we? The British government will go insane.’

‘Of course not.’ The old man looked affronted. ‘We put her on a plane this morning.’

Edik arched both eyebrows into a question.

‘She’ll be dealt with when she gets home,’ the old man told him. ‘An accident. She bicycles to work. London is a dangerous place for cyclists.’

‘The same. Except she doesn’t use a bicycle. She walks into town. Another accident.’

Edik pulled a face. ‘Are you sure we can get away with it?’

A film fell over his father’s eyes. His expression emptied. Edik knew that look. It meant anyone who stood in his way would, quite simply, be eliminated.

‘Leave any troublemakers to me,’ said the old man quietly.

C J Carver is a best selling author who has won the CWA debut dagger and the Barry Award for Best British Crime Fiction. 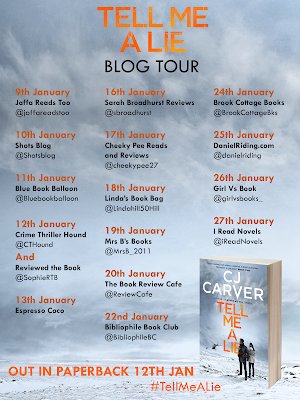 Do visit the other stops on the tour for more exciting content from C J Carver.