Jaffareadstoo is delighted to be hosting the first day of 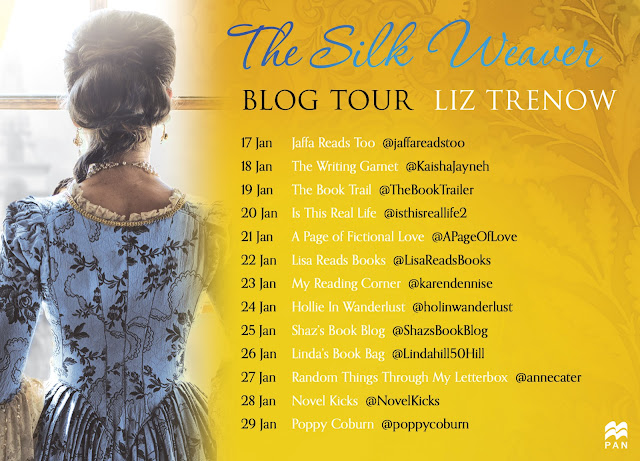 Anna Butterfield moves from her Suffolk country home to her uncle's house in London, to be introduced to society. A chance encounter with a local silk weaver, French immigrant Henri, throws her from her privileged upbringing to the darker, dangerous world of London's silk trade. Henri is working on his 'master piece' to make his name as a master silk weaver; Anna, meanwhile, is struggling against the constraints of her family and longing to become an artist. Henri realizes that Anna's designs could lift his work above the ordinary, and give them both an opportunity for freedom…

This is a charming story of illicit romance, set against the world of the burgeoning silk trade in eighteenth-century Spitalfields - a time of religious persecution, mass migration, racial tension and wage riots, and very different ideas of what was considered 'proper' for women.

My thoughts about The Silk Weaver...

Inspired by real historical events and characters, The Silk Weaver takes us back in time to the London of 1760, back to a time of social and political unrest and to what was an uneasy time if you attempted to earn your living in the burgeoning silk weaving industry.

Not that Anna Butterfield knew very much about the manufacture of silk when she first arrives in London from her home in rural Suffolk.  Staying with her more affluent relatives, Anna is about to be launched into London society and although this doesn’t sit easily with her , she knows that making a good marriage will be enough to save her father and  younger sister from  a life of hardship. From the start of the story, we know that Anna would much rather use her skill at painting to become an artist, however, Anna’s Aunt Sarah is equally determined to make the most of Anna’s assets in the marriage market.

What I enjoyed about The Silk Weaver was the genuine authentic feel to the narrative. It is obvious in the way that the story is allowed to develop that the author has done considerable research in order to bring to life this story of social unrest and illicit romance. Time and place is captured really well with some lovely details, particularly Anna's entree into society and of her burgeoning friendship with the French silk weaver, Henri Vendome, both of which are a real joy to read. I especially enjoyed the references to Anna's interest in art and of her encounters with some of the great artists of the time, however, for me, the story truly came alive in the story of silk manufacture. I found the description of the silk weaving process quite fascinating, especially the care and attention given to Henri's weaving of his master piece, and of the role Anna played in the creation of Henri's sumptuous silk design.

The Silk Weaver is a really lovely historical novel. It has a fine blend of romance and dangerous intrigue and yet, there is also friendship, love and a genuine desire to see that hope can survive, a combination which I think works very well. I am sure that fans of Liz Trenow’s previous novels will be as captivated by The Silk Weaver's story as I was.

Just as an nice addition I was intrigued by the silk image which graces the back cover of the book and discovered that it was printed around the time that this story is set by the renowned silk designer Anna Maria Garthwaite . There are comprehensive author notes at the back of the book in which the author discusses both the history and the inspiration behind the story of The Silk Weaver which I found to be most interesting.

Best read with… a cold veal pie and a cup of the newly fashionable coffee..

Liz Trenow is the author of three previous historical novels: The Last Telegram, The Forgotten Seamstress and The Poppy Factory. Liz's family have been silk weavers for nearly three hundred years, and she grew up in the house next to the mill in Suffolk, England, which still operates today, weaving for top-end fashion houses and royal commissions. This unique history inspired her first two novels, and this, her fourth novel.

Liz is a former journalist who spent fifteen years on regional and national newspapers, and on BBC radio and television news, before turning her hand to fiction. She lives in East Anglia, UK, with her artist husband, and they have two grown-up daughter.