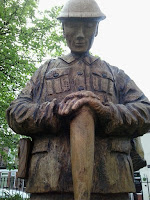 The broken soldier sings and whistles day to dark;
He's but the remnant of a man, maimed and half-blind,
But the soul they could not harm goes singing like the lark,
Like the incarnate Joy that will not be confined.

The Lady at the Hall has given him a light task,
He works in the gardens as busy as a bee;
One hand is but a stump and his face a pitted mask;
The gay soul goes singing like a bird set free.

Whistling and singing like a linnet on wings;
The others stop to listen, leaning on the spade,
Whole men and comely, they fret at little things.
The soul of him's singing like a thrush in a glade.

Hither and thither, hopping, like Robin on the grass,
The soul in the broken man is beautiful and brave;
And while he weeds the pansies and the bright hours pass
The bird caught in the cage whistles its joyous stave.

Born in Dublin, she was a poet and a writer. She was a leading member of the Celtic literary revival and a contemporary of W B Yeats,and the Rossettis.