Jaffareadstoo is delighted to be part of 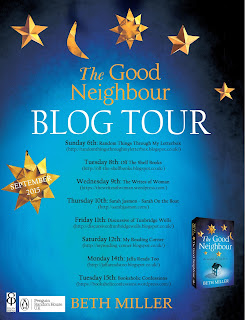 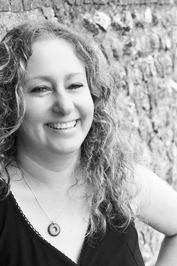 Beth thought she was going to be a poet when she grew up, but she is rotten at poetry. Her back-up plan was to work on The Muppet Show. Instead, she has written two novels, When We Were Sisters and The Good Neighbour, both published by Ebury (Random). She’s also written a book called For The Love of The Archers, out in October. She is currently wrestling with her third novel.

I am delighted to be able to share an extract from

When the horrible next-door neighbours finally move out, Minette is ecstatic. And even more so when she finds that Cath, who takes their place, is a completely different sort of person: easy-going, child-friendly, and with an interesting take on life. The two women quickly become friends and confidantes, and Cath encourages Minette to spread her wings, which includes getting to know their other neighbour, handsome Liam, a little better… But Cath is very guarded, reluctant to reveal much about her past, and Minette soon finds herself wondering if she really knows her new neighbour at all.

No one, including Minette herself, realised she couldn’t see properly until she got into trouble at school, aged six, for copying from the girl next to her. ‘I didn’t copy her answers,’ Minette protested, ‘only the questions, because I couldn’t see the board.’

Minette’s parents acknowledged ruefully that there had been a few signs: the way Minette sat so close to the television, for instance, or her uncertain responses when things were pointed out to her, but she was a bright child who had compensated for her poor vision in other ways. When the optician put the heavy test glasses onto her face, and slipped in the correct lenses, Minette cried out, ‘Oh, I can see lots of things!’ and her mum burst into tears. Minette couldn’t understand why. Hadn’t she just been given the precious gift of sight?

She loved her glasses, though they were chunky blue National Health ones that got her teased throughout primary school. She still had a pair of glasses, more flattering than the ones of her youth, for the brief periods without lenses first thing in the morning and last thing at night.

But one of her great pleasures, since she was six, was to remove all visual aids and allow herself to sink into Blur World. She could only do at it home, in a familiar setting, but oh, the comfort of it. Abe didn’t understand it. He felt sorry for her poor mole-like state, said if he was half as short-sighted as her, he’d have laser surgery like a shot. But when Minette took out her lenses, and the room lost its edges, shifted to a colourful fog, she felt herself relax. It wasn’t just, as Abe suggested in one of his amateur psych moments, that she’d regressed to childhood, to that time before anyone knew she couldn’t see. It was more than that: it was also an abdication of responsibility. ‘I can’t see,’ says the inhabitant of Blur World, ‘don’t ask me to do anything.’

Abe was at work, and Tilly was having a nap in her cot, worn out after a stressful trip to Toys R Us. Now that Minette had finally made the decision not to go back to work, there were going to be a lot more days like this. She sighed. But Cath next door was right – she wouldn’t get this time again. She took out her lenses and lay on the bed, gazing at the ceiling, which in Blur World was a fuzzy white expanse, with a blue sparkly blob in the centre (the lampshade).

What was that Cath had said?

We’ll all be dead in a hundred years.

No one had ever said anything like that to her before, and it was a revelation. Minette had always been a high achiever. Her glasses excluded her from the cool gang, so she naturally formed alliances with the geeks and nerds, the hardworking kids. She never really had a rebellious phase. Not when her parents split up; and not even in her teens. She went to university, got a good degree while working hard at a series of part-time jobs, and settled down into a career with a pension, a steady relationship with Abe. They had a very conventional life. He worked, she looked after the baby, they saved a little money each month, did the recycling and sponsored a child in Africa. Minette had never been too drunk to brush her teeth before bed, had never left her seatbelt off, never slept on a beach.

And yet, all the time, there existed a parallel universe she hadn’t known about, a world in which she could have been guided by the straightforward philosophy of ‘we’ll all be dead in a hundred years’. Imagine if, instead of working hard at her homework, maintaining a steady Grade A, she’d gone out dancing and boozing like the majority of her classmates. So many of them had dropped out of education completely, got work as shop assistants and hairdressers and gardeners. What if Minette hadn’t gone to university after all, but had remained in her Saturday job in the chemists, asked to be made full-time? They’d wanted her to stay, had given her such a lovely send-off, presenting her with a bag full of the make-up she’d admired when she tidied it on the shelves each weekend. She still had some of it: an eye pencil in the most perfect grey, now little more than a nub, and a Chanel lipstick, which she only ever used on special occasions.

What if she’d lived in this parallel universe? What if she’d thought, it doesn’t really matter what job I do? Shop assistant, tourism officer, brain surgeon: we’ll all be dead in a hundred years, after all. If she hadn’t gone to university she wouldn’t have moved to Brighton, or met Abe, or had Tilly. But she would have done other things. Travelled round South America on a motorbike, perhaps. Or become a burlesque artiste. Met a crazy man with fair hair and brown eyes, and fallen tumultuously in love. And not cared, because ’we’ll all be dead in a hundred years.

I’m lucky, thought Minette, snapping her eyes back to attention so that the orbs of lights stopped dancing around the blue blob. I have a lovely man, and a gorgeous daughter, and, and, and. She conjured up a Kodak moment of Abe, him holding Tilly as a tiny baby on Brighton beach last year, father and daughter squinting into the wintry sun and, in their woolly hats, looking very much alike.

Her mind drifted away from Abe, to the recent encounter with Liam. Snogging like teenagers on her sofa, as she’d said to Cath, while Tilly slept upstairs.

‘I’m bored with making this macramé bikini,’ he’d said as she opened the door to him.

‘Is there even such a thing?’ she laughed, resigned to the fact that, yet again, he looked as hot as all get out and she looked rank. He was the handsomest man in the street – probably in the whole of Sussex. As for her, Tilly had spat up milk on her sweatshirt, and her hair was in its home-day pineapple top-knot.

‘In my head, there is. You can model it and I’ll take a picture for the front cover of Macramé Masturbators Monthly.’

‘What have you really been doing?’

‘Listening to my mum on the phone, being upset about my gran.’

‘Oh no, why, what’s happened?’ She stood aside to let him pass.

‘My mum saw her yesterday and Gran said she wanted to go home, and when Mum said, “You are home,” she cried.’

‘And poor me for having to listen to it. I need a treat after that, so I thought of you.’ He smiled. ‘Where’s Tilly?’

‘Asleep.’ She showed him into the living room.

‘Heal’s. Abe’s parents bought it for us.’ Shut up, Minette.

Liam sat down. ‘How long till Tilly wakes up?’

Minette, flustered, glanced at her wrist, though she wasn’t wearing her watch. ‘Half an hour? Maybe a bit longer?’

‘Perfect.’ He patted the seat next to him.

‘No thanks. Sit down please, Minette.’

She sat abruptly, looking at her lap so she couldn’t see his face, his eyes, the path of wrongness they would lead to.

Tempted by this extract?

Well, you can find The Good Neighbour on Amazon UK and Amazon.com

My thanks to Beth Miller and Ebury Publishing for the invitation to be part of this exciting Blog Tour.

Do visit the other stops and discover more about The Good Neighbour.