And to introduce the author


ST: Thanks for having me on your Blog. I really appreciate it.


I appreciate that giving away anything after the first few pages is something of a spoiler, but can you tell us a bit about Solomon Creed?

Solomon Creed is the name of the main character of the story. He arrives shoeless in the Arizona desert and seemingly knows everything about everything but nothing about himself. The only thing he knows for sure is that he is there to save someone. Unfortunately that person turns out to have been buried that morning. But how do you save a man who is already dead?


Where did the idea for Solomon Creed the character come from? Did he come before the story?

I had the general idea first, of a man who has to save others in order to ultimately save himself, then I worked backwards and spent a lot of time thinking about who that man might be and what he might look like. Solomon Creed is an albino, a blank sheet of a man, wiped clean of his past. As he starts to remember who he is he starts to get coloured in, literally and figuratively.

He’s very much in the long tradition of the knight errant or the ronin or the lone rider in westerns. He has a code and a quest and he blows into places with deep secrets and starts asking awkward questions that put him in harm’s way. I love those kinds of stories and always wanted to write one. And now I have.


Why did you decide to set the novel in the deserts of Arizona? Was a lot of research involved?

I wanted Solomon to walk out of a very hostile environment wearing inappropriate clothes to give the impression that he had just appeared and shouldn’t really be there. To my mind this meant he had to either emerge from a snowstorm wearing a T-shirt and shorts, or from a desert wearing a suit. I’d visited Arizona a few times and loved its otherworldly, elemental landscape so I went back there on a research trip looking for a place to set the book. In my previous books I’d built a whole city in Turkey - Ruin - to set the stories and it was a lot of work so I wanted to avoid that if possible. In the end, though, I couldn’t find a place that exactly fitted what I needed for the story so I ended up creating a whole town anyway, the city of Redemption.

My trip to Arizona was invaluable, though. I took hundreds of photos, some of which I’ve posted here on my Pinterest page, and referred to them endlessly while writing. I’m very visual so I need to know what things look like. Going to Arizona meant I knew what it smelled and felt like too and that also made its way into the book.


Solomon Creed goes by another title in the US – The Searcher. Which title came first? Do you think one loses or gains something over the other?

Solomon Creed is my title. It’s actually the only book I’ve ever written that has retained my original title. Sanctus started life as Ruin, so did the Key, and The Tower was called End of Days. Solomon Creed was always Solomon Creed until my US publisher decided to change it to The Searcher for their market. I would have preferred it to stay as Solomon Creed, partly because I wouldn’t then have to endlessly explain to various readers on both sides of the Atlantic that it’s the same book with a different title and cover. I actually did a small survey of my writer and reader friends in the US, Canada and the UK and found that, generally, the UK readers and writers prefer the UK cover, and the US and Canadian readers and writers prefer the US one, so those marketing peeps clearly know what they’re doing. I think both covers are great, actually, so I can’t complain. Maybe we can do a straw poll of your subscribers too, ask them which cover and title they prefer. :)

Answers in the comments section below. 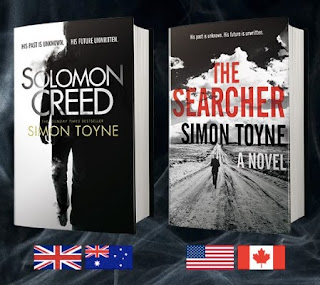 Your Sanctus trilogy focused very much on history and identity. Solomon Creed does this as well, albeit in a different way. Do you find yourself returning to certain themes and ideas? Why do you think they appeal?

Well, that’s very perceptive of you.

I think identity is one of those big, universal human themes that overlaps with history, philosophy, science and religion. In fact if you did a Venn diagram of those four subjects in relation to mankind then ‘identity’ would be the point where they all intersect.

As a writer, and a reader, I like stories that make me think about all the big fundamental questions - who am I? why are we here? what’s the point of everything? I also love thrillers and a fast-paced story. I want you to turn the pages and be desperate to know what happens next, but I also want to write something that has a bit more depth than the average crash and dash action story. Don’t get me wrong, I love a good, mindless action-er as much as the next person, but it takes me a year to write a book and I have to have something going on in it that engages me and makes me think a bit, otherwise I’d lose interest and I think the reader would too. I also think thrillers are a bit of a guilty pleasure and if I can inform you a bit while you’re (hopefully) frantically turning the pages, and make you think about it in a little more depth it will resonate more. And identity is central to all of us, we’re all trying to figure out who we are, so I find it endlessly fascinating. It’s a perfect thriller element too containing mystery, uncertainty, and questions seeking answer

What’s next for you? Will Solomon be returning?

Yes he will. This is the first book of a new series and so, even though each book will have a self-contained story and mystery, his personal journey towards discovering who (or what) he is will continue through the series.

Next he’s heading to France to find the tailor who made his suit. I’m writing it now. It’s got Nazis and modern right-wing politics and intolerance woven into it - it’s going to be a corker. :)

The publishers Harper Collins have generously offered a copy of Solomon Creed to one lucky UK winner of this giveaway.

My thanks to Simon for his insightful interview and to Harper Collins for extending an invitation to be part of this exciting Blog Tour. 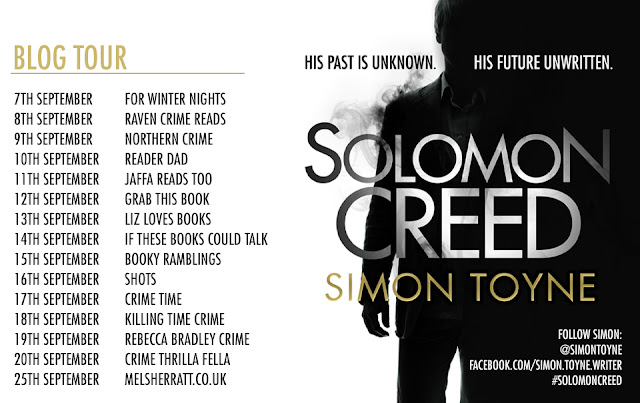