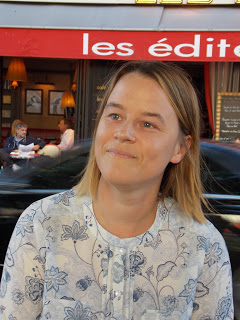 🍴Welcome, Susan. What favourite food are you bringing to Sunday brunch?
Hello Jo! Thank you for inviting me. Of late I have grown very fond of a bowl of soya yoghurt with granola and blueberries. If we have bananas, I’ll chuck those in too! If we’re at a café I like and this accursed lockdown isn’t preventing us, I’ll have huevos rancheros too.
🍴Would you like a pot of English breakfast tea, a strong Americano, or a glass of Bucks Fizz?
It would be a mug of instant coffee or made in a cafetiere. If it’s a slow morning, I’ll grind my own beans! And a good dollop of milk. My sisters gave me a mug for my birthday with a picture of the cover of White Feathers on it and I always drink my coffee out of that.
🍴Where shall we eat brunch – around the kitchen table, in the formal dining room, or outside on the patio?
I think in a set of comfy chairs near a bay window looking out onto a garden, cradling our warm mugs and watching the finches feed on the bird feeder.
🍴Shall we have music playing in the background? And if so will you share with us a favourite song or piece of music that makes you happy?
For background music, Billie Holiday, particularly “These Foolish Things”. A song that raises my spirits is Don’t Sacrifice by Mirenda R. I’d had so much nonsense and spite from certain people in the Irish literary world and there had been a health issue in my immediate family so I just said enough of these people, I’m not getting any money for this dog’s abuse they’re giving me, and broke ties. And every time I hear that soaring middle 8, “I know that I am worthy”, a shiver runs up my spine. There’s a passage in Lucia’s War where she looks at her hands and tells herself “These hands have done worthy things” that is eerily similar given I hadn’t heard the song yet when I was writing it.
Wow that ended up being longer than I thought! I obviously have Issues about this topic 😊
🍴Which of your literary heroes (dead or alive) are joining us for Sunday Brunch today?
I always reckoned DH Lawrence would be a bit of a hoot because he would be wildly entertaining – up till the point where he turns on you and has to be ejected of course. I’d say James Baldwin would have a lot of wisdom to share, and DH Lawrence wouldn’t faze him in the slightest. Maeve Binchy would have the two of them eating out of her hand. If Lucia were a real person and coming to brunch, she would probably bring along a few dead composers so she could argue with them about their long phrasing!
🍴Which favourite book will you bring to Sunday Brunch?
Probably Jane Eyre. I’ve been listening to Rowan Coleman’s live Instagram read-along and it’s wonderful. So much richness in the narrative. I think both my novels, White Feathers and Lucia’s War, have been heavily influenced by it. Less so Unfortunate Stars though.
Also, it’s not a book, but definitely the Chick Lit 4 Life podcast – you need to hear it to experience it 😊
🍴When you are writing do you still find time to read for pleasure? And is there a book you would like to read but haven’t had time for …yet!
I’d love to read David Olusoga’s book on WWI but I’d say it’s a big one. As for books, I often don’t know in advance what I want to read until I see it in front of me. An exception to that is The Tainted by Cauvery Madhavan, a historical fiction about Irish soldiers in India and the mutiny back home. That had been on my radar for a while before I bought the paperback.
🍴What’s the oldest book on your book shelf?
A book of essays by Charles Lamb, I think it’s a first edition or something. Not sure where it is right now though.
🍴Where do you find the inspiration for your novels?
Regarding World War One, I did my final year essay on the Battle of Verdun, so I’ve always been a bit obsessed. Also with music, which prompts Lucia’s War. I used to play several instruments and sing in a choir. Unfortunate Stars was inspired by a real story I saw in a museum in Cologne, which I talk about in the afterword of the book. The title was taken from a poem by Goethe.
🍴Have you a favourite place to settle down to write and do you find it easier to write in winter or summer?
I can write pretty much anywhere that has a decent chair, a desk the right height and the right light.
🍴When writing to a deadline are you easily distracted and if so how do you bring back focus on your writing?
I think when I’m in the zone for a prolonged time like that, I tend to inhabit it nearly constantly. That can be troublesome when day to day commitments impose!
🍴Give us four essential items that a writer absolutely needs?
Connections. If you don’t have connections, then a day job and sheer brutal determination will do. I have both the latter, which might help me with the former, and then again might not!
A desire to tell the story that overrules everything else. You have to want it badly enough.
Time, whenever you can get it.
Access to a laptop or at the very least a keyboard with Bluetooth to a screen. I’m not writing longhand.
🍴What can you tell us about your latest novel or your current work in progress?
It’s set in West Cork and concerns the intersection of future worries about climate and past tensions from the Irish Civil War. I’m just starting the second draft now.
Latest Novel 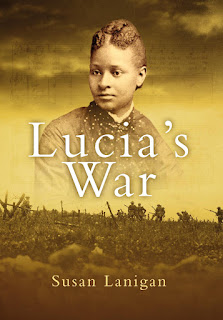 London, 1950. Soprano Lucia Percival has overcome racism and many obstacles to become a renowned opera singer. She is now due to perform her last concert. But she has no intention of going onstage. A terrible secret from her service during the First World War has finally caught up with her.
London, 1917. Lucia, a young Jamaican exile, hopes to make it as a musician. But she is haunted by a tragic separation that is still fresh in her memory - and when she meets Lilian, an old woman damaged by a similar wartime loss, she agrees to a pact that could destroy everything she has fought so hard to achieve.
From the Western Front and the mean streets of Glasgow, to black society in London, Lucia’s story tells a tale of music, motherhood, loss and redemption.
More about Susan
Susan Lanigan graduated from Trinity College Dublin with a degree in English and History in the late 90s, then pursued a Graduate Diploma in I.T. in Dublin City University and a Masters in Writing in NUI Galway.
Her first novel White Feathers, a tale of passion, betrayal and war, was selected as one of the final ten in the Irish Writers Centre Novel Fair, 2013, and published in 2014 by Brandon Books. The book won critical acclaim and was shortlisted for the UK Romantic Novel of the Year Award in 2015.
Her second novel, Lucia’s War, also concerning WWI as well as race, music and motherhood, was published in June 2020 and has been named as the Coffee Pot Book Club Honourable Mention in the Modern Historical Book of the Year Award.
Susan, where can we follow you on social media?
Twitter: @susanl_author
Website

Thank you for taking part in Sunday Brunch with Jaffareadstoo.