Book Blitz ~ The Last Blast of the Trumpet by Marie Macpherson

Delighted to be part of this Book Blitz today

Conflict, Chaos and Corruption in Reformation Scotland
He wants to reform Scotland, but his enemies will stop at nothing to prevent him.
Scotland 1559: Fiery reformer John Knox returns to a Scotland on the brink of civil war. Victorious, he feels confident of his place leading the reform until the charismatic young widow, Mary Queen of Scots returns to claim her throne. She challenges his position and initiates a ferocious battle of wills as they strive to win the hearts and minds of the Scots. But the treachery and jealousy that surrounds them both as they make critical choices in their public and private lives has dangerous consequences that neither of them can imagine,
In this final instalment of the trilogy of the fiery reformer John Knox, Macpherson tells the story of a man and a queen at one of the most critical phases of Scottish history. 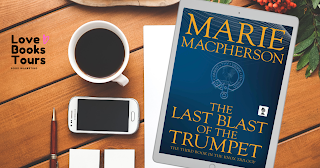 What did I think about it..
I have followed this fascinating trilogy from the very first blast of the trumpet which I reviewed back in 2013 when I was just starting out as a book reviewer. The thrill of being trusted with an author's work remains just as exciting today as it did back then and to have followed a series from its beginning, to its completion, has been a real treat.
In The Last Blast of the Trumpet we return to the complicated world of Scottish history and religious politics. We meet again with the fiery preacher, John Knox, as he enters Perth ready to lay the foundations of what will become a violent, and bloody, civil war. With the ailing, Regent of Scotland, Marie de Guise, doing all she can to protect the kingdom for her daughter, it is soon obvious that Knox's quest to scourge Popish idolatry out of Scotland will not be gainstayed. That this war of Reformation is fought between the Scottish people makes the unrest all the more disturbing, especially as there are no winners, only losers in this battle against God.
It's been interesting to get this vivid interpretation of Scottish history particularly in the years following Marie de Guise's death and the arrival of the young Mary Stewart, taking her rightful place as Queen of Scots. Knox's vitriol against the fair, young Queen is well documented and the author succeeds admirably in bringing their encounters alive with all the venom that this Scottish Presbyterian minister possesses.
Beautifully written, extensively researched and with a wonderful historical authenticity, The Last Blast of the Trumpet, is complete in itself and it is perfectly possible to read it as standalone historical fiction, especially if your interest in Scottish history takes in the tumultuous reign of Mary Queen of Scots. However, as the conclusion to the trilogy there is no doubt that the author has done herself proud with this final blast. The history comes alive in the imagination, as does the rather dour, Knox,  but what's also interesting is to see the people from history take their place in the spotlight, standing comfortably alongside those fictional characters who have been such stalwarts since the first book.
The author has concluded the Knox trilogy with all the passionate zeal and intensity as the man himself. She has infused such life and personality into the man that, although I am still nowhere near liking him, I do have more of an understanding into his life and times, and all credit to the author for bringing the life of this belligerent, political and religious reformist to life in a remarkable and fascinating way.
My review of The First Blast of the Trumpet is here  (2013)
My review of The Second Blast of the Trumpet is here (2017)
About the Author 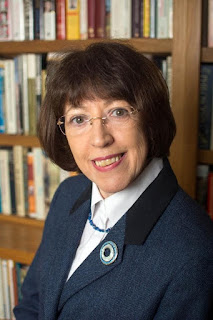 Scottish writer Marie Macpherson grew up in Musselburgh on the site of the Battle of Pinkie and within sight of Fa’side Castle where tales and legends haunted her imagination. She left the Honest Toun to study Russian at Strathclyde University and spent a year in the former Soviet Union to research her PhD thesis on the 19th century Russian writer Mikhail Lermontov, said to be descended from the Scottish poet and seer, Thomas the Rhymer. Though travelled widely, teaching languages and literature from Madrid to Moscow, she has never lost her enthusiasm for the rich history and culture of her native Scotland.
Writing historical fiction combines her academic’s love of research with a passion for storytelling. Exploring the personal relationships and often hidden motivations of historical characters drives her curiosity.
The Knox Trilogy is a fictional biography of the fiery reformer, John Knox, set during the 16th century Scottish Reformation. Prizes and awards include the Martha Hamilton Prize for Creative Writing from Edinburgh University and Writer of the Year 2011 awarded by Tyne & Esk Writers. She is a member of the Historical Writers’ Association (HWA), the Historical Novel Society (HNS) and the Society of Authors (SoA).
Twitter @scotscriever
@PenmorePress1
@LoveBooksGroup
Amazon UK 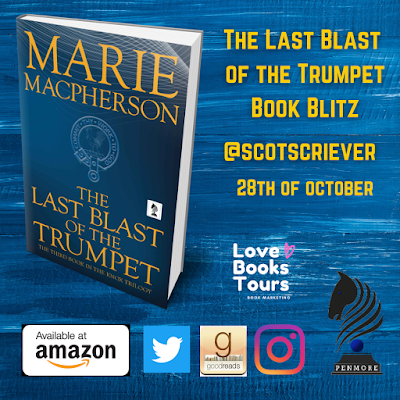