Berlin, 1989.
Siblings Rune and Lotte are awakened by Mama and told to follow her quietly into the night. Last time they snuck away from Papa, with Mama bruised and broken, they were back within a week. But this time they are starting a new life, Mama says—where nobody can hurt them again.
Ten years later, the memories of their escape are blurry; Mama is long gone and the siblings are back at Papa’s house. But when they receive a mysterious notebook that seems to have come from Mama, Papa tears it apart. Could there be more to their past than they’ve been led to believe? With Rune paralysed by fear, Lotte takes their fate into her own hands.
When she learns about the ‘Puzzle Women’ working tirelessly to reconstruct files shredded by the former secret police, she begs them to help her piece Mama’s story back together. But as Papa’s threats against both siblings escalate, can they unite to learn the full, brutal truth in Mama’s own words at last?
What did I think about it..
This is one of those stories which grabs you right from the start with an emotional connection to the characters, particularly, devoted siblings, Rune and Lotte, and which doesn't let go of your heart until the whole of this compelling story is told.
Beautifully written, with strong characteristaion and a powerful sense of time and place, we come to share in Lottie's quest as she tries to put together the pieces of ripped paper which make up her mother's journal. However, Lotte can't do this alone, so she enlists the help of the amazing 'Puzzle' women. A group of workers who have a special talent for reassembling shredded secret police files, piecing together the shards of lives which have been shattered and broken.
Moving, silently and swiftly, forwards and backwards in time, between the momentous year of 1989 when Berlin's wall finally crumbled, to a time, ten years later, when Lotte and Rune are having to live with the frightening knowledge that their mother is gone from them. I know that I am being deliberately vague about the whole premise of the story but this is such a powerful read that I fear to spoil it would do the author a great disservice. More than once I read with tears in my eyes at the injustice that was meted out, not just to those who lived in the shadows of Berlin's secret police, but also of the abuse suffered by wives and mothers who were destroyed by their violent and uncaring men.
Whilst The Puzzle Women is about state injustice, domestic violence and abuse, it's also about love in all its many guises and, eventually, there's a sense of hope even when all the odds are stacked against you. This is not an easy read by any stretch of the imagination but it's so beautifully written that parts of it, I am sure will stay with me for a very long time.
About the Author
Anna Ellory is a former nurse from Bath. She completed an MA in Creative Writing from Bath Spa University, where she was mentored by author Fay Weldon. Anna was inspired to write The Puzzle Women by her own experience of surviving domestic abuse, her research into the first women’s refuges in Europe, and the real- life ‘puzzle women’ who pieced together the Stasi’s shredded past.
The Puzzle Women by Anna Ellory is out now, published by Lake Union, priced £8.99 in paperback original.
Twitter @AnnaEllory #ThePuzzleWomen
@ed_pr
@AmazonPub 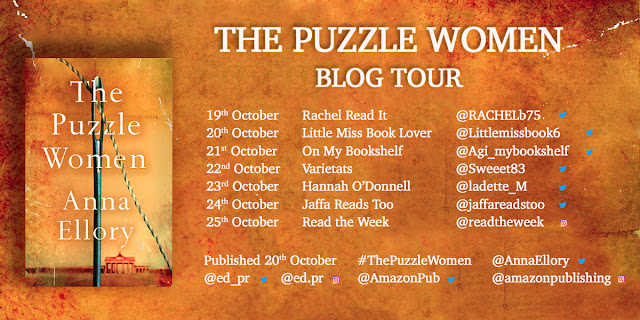