This is glamorous Bombay in the late 1950s.
Love has blossomed in London between vivacious Scottish Presbyterian, Audrey, and clever Indian lawyer, Nat Zachariah.
When the happy newlyweds move to Nat’s exotic homeland and the striking family villa, Audrey must deftly navigate the rituals, secrets, intrigues and desires of his Bene Israel Jewish community, and adjust to perplexing new relatives.
In time, the past unlocks, old family ties unravel, lies are exposed and passions run high as different generations fall out. Then something shocking happens that undoes everything.
Will this marriage that has crossed boundaries survive?

What did I think about it..
When Audrey Cuthbertson and Nathaniel Zacheriah meet in 1956 at the London Palais de Danse, they are immediately attracted to each other but their lives and cultures are very different, Audrey comes from a strict Presbyterian background in the north of England, whilst Nathaniel's Indian/ Jewish heritage couldn't be more different. However, after a whirlwind romance, the newly weds make the momentous decision to move to Nat's home to live with his family in Bombay, where Audrey must adjust to the sights, sounds and very different way of life in the Bene Israel Jewish community.
The author has written a vibrant and complex story, which brings the Bombay of the 1950s alive in all of its colourful splendour. Audrey and Nat's married life together isn't without its problems as Audrey discovers that living in Bombay with Nat's family takes some getting used to, and especially as Nat now seems to be an altogether different person to the man she met, and married, in London. As the story progresses, it's fascinating to learn that the family who call Mango Bay their home are a complicated bunch and yet the author does a great job in bringing them all alive in the imagination. The multi cultural divisions are well explored as are the many intrigues and differences which the Zachariah family get drawn into over the span of the novel. At the start of the novel is a glossary of Indian words and phrases which I found especially useful and referred back to it from time to time.
It's always interesting to escape into a culture which is not your own and the author has succeeded in describing a wonderfully exotic world complete with intrigue, mystery, and family secrets. 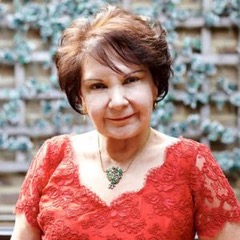 Serena spent her childhood in India, qualified as a Lawyer in England, and worked in a London law firm.
Some of her novels have a strong romantic arc although she burst the romance bubble with one quirky departure. Other novels pull the reader into the dark corners of family life and relationships. She enjoys the challenge of experimenting and writing in different genres.
Her short stories and a medley of articles, including her reviews of thrillers and crime fiction, feature on her blog.
Fast forward to a sabbatical from the day job when Serena traded in bricks and mortar for a houseboat that, for a hardened land lubber like her, turned out to be a big adventure. A few of her favourite things are collecting old masks, singing and exploring off the beaten track.
Serena and her golden retriever, Inspector Morse, who can’t wait to unleash his own Facebook page, live in London.
Twitter @Sefairfax #Mango Bay
@RandomThingsTours 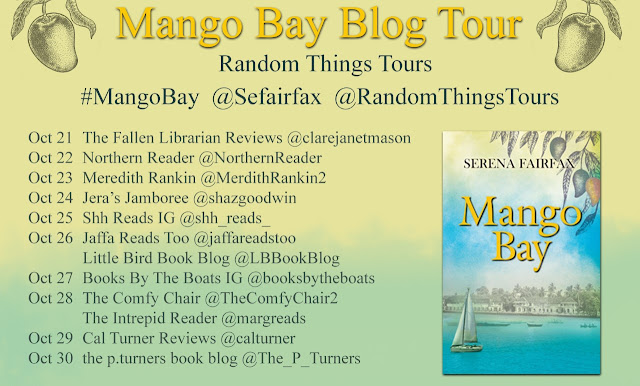