Blog Tour ~ Woman in the Water by Katerina Diamond

Delighted to host today's stop on this exciting Blog Tour

When a woman’s body is found submerged in icy water, police are shocked to find she is alive. But she won’t disclose her name, or what happened to her – even when a second body is discovered. And then she disappears from her hospital bed.

Detectives Adrian Miles and Imogen Grey follow their only lead to the home of Reece Corrigan, and when his wife Angela walks in, they immediately recognise her. She’s the woman from the river, with her injuries carefully masked.

The more they dig into the couple, the less they understand about them.

Why have people in their past been hurt, or vanished?

And why doesn’t Angela want to be saved?

Well, this one gets off to a really dramatic start and the drama only increases as the story progresses. Detectives Adrian Miles and Imogen Grey find that no matter how close they get to solving this really complex case, the further they get from bringing the perpetrator to justice.

There's some very dark aspects to the story, and there's a particular twist half way through the book which shocked me completely, and which turned the atmosphere in the story from dark to darker in just a few tense pages. To be honest it upset me, but I can understand why the author chose to take the plot in this direction, and whilst it was shocking, it was handled in a realistic way, which I think did justice to a taboo topic. There is so much I want to say about the plot, and believe me, this one has so many complications, but no matter how hard I try to add any detail, to do so would really spoil the overall effect, as this story is best read with absolutely no idea of what's about to unfold.

As always the plot is driven by the partnership between Adrian Miles and Imogen Grey, who as well as being lead detectives on this complex case of murder and abduction, they are also intimately involved which, sort of, complicates how they work together in this story. They're a complex duo, each have their own problems which at times threaten to hinder the investigation and in this story their growing connection to each other is tested to the absolute limit.

Woman in the Water is filled with dark and twisty motives for murder, and the chief suspect, who is as slippery as an eel, takes great delight in keeping one step ahead of the investigative team. The story ends on something of a cliff hanger, so I'll look forward to seeing what happens next for Adrian Miles and Imogen Grey in book #7 😊

Woman in the Water is out now as an ebook and will be published by Avon in paperback on the 9 January 2020.. 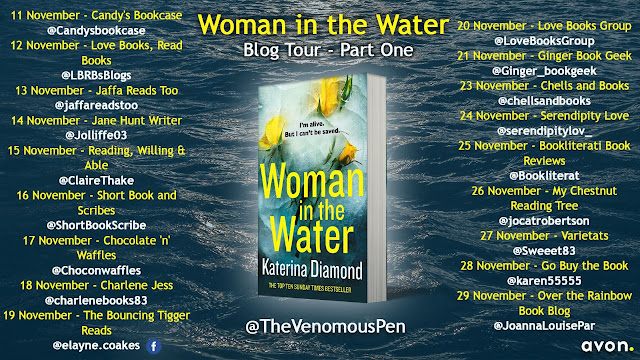