The Blackwells are a family with an extraordinary history and astounding traditions, which include attending their own funerals before they die! Their ways are questionable and their stories about deceased relatives are as bold as their red hair, but it is their eclectic wares that keep tourists coming back to their market in the town of Coraloo. Charlie Price, whose world has come crumbling down after a lapse in judgement leaves him unemployed, finds himself flung into the chaotic world of the Blackwells when he relocates to Coraloo with his socialite wife, Velveteen, and shy son, Gideon. Here Charlie attempts to make a living as a 'picker', reselling under-priced items he picks up at the market. Some of the Blackwells welcome him with open arms, but others resent pickers and want him thrown out of the market. Charlie soon finds this new way of life under threat and his quest for simplicity seems to be crumbling. Perhaps it's time for Charlie to have a funeral of his own! This charming story of hope will warm your heart and make your imagination soar.

Tofts were not welcome at the renowned Coraloo Flea Market. The Blackwells made certain of that. On the brick wall, the sign outside the once prosperous shoe factory proclaimed, NO DOGS OR TOFTS – GRANNY BITES! Reading these words, Charlie Price scratched his thinning blond hair, musing over the long-standing rivalry he had read about between the Tofts and the Blackwells. Today was Thursday; the market was closed, but there was nothing stopping Charlie from exploring. The scent of old leather and lavender lured him – as it did countless others – through the stone archway into the still, quiet building, carrying with it the promise of unearthing a hidden treasure or memorable trinket. Inside, the shops, each specific to their wares – antique books, hand-dyed ribbons, flowers, freshly pressed olive oils, leather goods, and an occasional antique dealer – lined the perimeter like tiny homes. These, Charlie knew, belonged to the Blackwells. The center, reserved for paying vendors and hungry shoppers dining on Granny’s delicacies at hand-hewn tables, was empty today.

He peered through one of the storefront windowpanes. In front of a faux mantel, two armchairs were arranged in such a way the shop almost looked livable. Charlie moved on. The next shop appeared promising – less orderly, no décor. He spotted a French horn, dented and in need of a polish. Music is money – a mantra he heeded when considering a purchase. He’d come back and make an offer in the morning, but he would have to arrive early if he wanted to turn a profit – especially at the Coraloo. Pickers arrive early.

Nestled at the top of a rolling green hill in a picturesque town with stone inlaid streets, overlooking curving rows of carefully maintained cedar-shingled rooftops not yet touched by the deluge of tourists or modern construction trends, sat the Coraloo Flea Market. Wayfaring magazine called the market one of the country’s hidden wonders – known for its charm, history, food, and peculiar owners. The writer described it as a place where peace and simplicity dine with the eccentric – a trove for modern-day treasure hunters – keeping watch over a quaint commonality held together by deep ancestral roots and rivalries. It’s why Charlie entertained the thought of moving his family two hours and forty-one minutes southeast of the big city – to start over, to live simply, to shop the Coraloo. He shined his flashlight into the shop – an antique globe perched on a wooden pedestal caught his eye. He doubted they would take less than the asking price, but it was worth a try. Beside it, sitting on top of a pile of yellowing maps, a gold rimmed teacup sat chipped and out of place. It wasn’t valuable anymore. Somebody had probably tossed it out during a spring clean, along with broken picture frames and melted candles. But regardless of its worth, it had a story. The cup once had an owner – possibly a fan of Ceylon orange pekoe or Earl Grey. Had the vessel been a gift or a souvenir from an unplanned road trip? Had the owner been forced to part with this fragment of everyday life to make room for simplicity?

No… that was his story. With his hands in the pockets of his slacks, Charlie slumped down on an old church pew outside the market shop. Had life really come to this? Had four years at university and a career with a six-figure income dwindled down to sorting through the discarded wares of others? He had been good at his job and never doubted his instincts. He was meticulous, thorough – except on the day the proposal landed on his desk.

A balmy August breeze crept into the brick edifice, bringing with it the sweet aroma of freshly hung tobacco from a farm on the other side of the hill. Charlie closed his eyes and inhaled distant days – memories of a life absorbed by legality and expectation, before the whirlwind of the past year wreaked devastation on his once predictable life.

He remembered the loan. How could he forget? An equipment loan three times what the proprietor needed. His university roommate and colleague, Carl Rogers, had pulled him aside. “This guy is a pal of mine. Everything’s here. Just sign and you’re done.” That should have been his first red flag – slow down, look closer. The plan seemed solid, the client a chef and former restaurant owner. It was a lapse in judgment. A missing document. He should have caught it. With the fragile state of the financial world, there was no room for error. On a wider scale, the newspapers swarmed with rumors of a crumbling economy in response to banks’ over lending to house-hungry newlyweds. Pair that with this class-action lawsuit of press- worthy proportions, and the bank would take a healthy loss, leading to some very unhappy shareholders.

He had called Velveteen. She had said she was mid-foil at the salon and could not meet him for another two hours. He had packed up his office and walked out the front doors of Heritage Financial without looking back. He had needed time to strategize, to carefully word how he was going to tell his wife of eleven years that he was unemployed – not just unemployed, but most likely black-balled from every bank, accounting firm, and food truck in the city.

Stupid food trucks. Charlie let his head fall into his hands, vowing to never eat at a food truck again. The fragmented events leading up to this moment entered his mind, overshadowing the potential of Coraloo.

His rear end was sore from sitting for so long, and he wasn’t sure he could swim in his own guilt and self-loathing much longer. He raised his eyes at the click clack of high heels.

Velveteen Price arrived with the latest Melba DuMont novel peeking cautiously over the edge of her handbag. He stood and kissed her – a quick peck on the lips. Whenever he kissed her in public, he pretended all of the other men around were jealous. He loved every inch of her, inside and out, and dreaded telling her their life would drastically change. He sensed she already knew something – regardless, Charlie wanted her to hear it from him, so explained every detail, from how Carl, despite being a known idiot, had insisted his street food truck client was an easy underwrite to the fact that when it fell apart, Charlie took the fall. At this Velveteen informed him her friendship with Carl’s wife, Mary Beth Rogers, was over.

“I’m done with that woman. I really am!”

Charlie had laughed – he used to laugh more.

“No, for making it this far. It’s not over, you know. You’ll find something better. You were almost VP of the country’s largest bank! Somebody will see the value in that… Somebody will see your value! What about Standard? I’m sure they would hire you. I’ll call Rebecca, her husband is pres –” 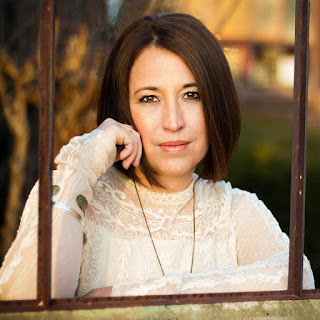 Lauren H. Brandenburg is the author of The Death of Mungo Blackwell as well as middle-grade series The Books of the Gardener. Lauren and her husband, Jamie, live in Nashville, Tennessee with their children. 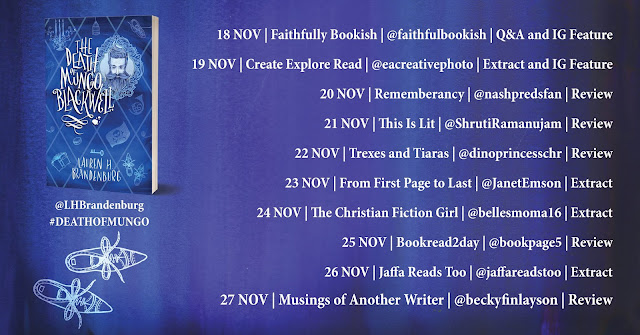