Delighted to host a stop on today's blog tour stop

Duncan Jones, freelance political journalist and blogger, loses his weekly column at a national newspaper and turns to investigative reporting.

The chance remark of a friend leads him to suspect that the Russians are directing the new British government's policies and decisions. As he visits Moscow and Ukraine to discover more, scandal follows intrigue, dark forces attempt to silence him by whatever means possible and he turns to an unlikely ally for help.

A Friend in Deed is a fast paced psychological thriller set in an all too believable near future.It is also the story of how one man confronts the traumas in his past and works out how to resolve them.

A Friend in Deed is set sometime in our near future when the political arena is just as complicated as it is today. A new political party, aptly named, Act Now!, has emerged and is currently occupying the seat of power in Whitehall. Duncan Jones is a freelance reporter who is finding it increasingly difficult to eke out a living as an investigative journalist as newspapers, already in decline, are only interested in hard hitting stories.

When Duncan gets insider knowledge about the possible connection between the Russians and the British government, his journalistic interest is roused and before too long he is heading into a very dangerous situation which has dramatic consequences, not just for Duncan's future, but which also threatens to expose secrets from his past.

A Friend in Deed is a cleverly controlled psychological thriller which rattles along at a fast pace, and  introduces some very nefarious characters, both in this country and abroad, who are more than rattled by Duncan's determination to discover the depth of corruption. There are some very detailed descriptions of mysterious and deadly political shenanigans which, in a supposed post Brexit, post Trump world, I found to be scarily credible.

The author writes well, and has created some memorable characters bringing them to life in a very credible way. The fast pace of the story helps to keep up the momentum, which was quite tense in places, especially when discovering more about some very dodgy Russian dealings. The consequences of discovering what was going on in some very dangerous places made the story all the more exciting.

I thoroughly enjoyed meeting up again with Duncan Jones who I met first in this author's previous novel, Love's Long Road. Throughout this continuation, there are some hints to what went on in that book but I don't think it's essential to have read it as this story works as a standalone and yet, as with all series, it is best to start at the beginning for greater enjoyment.

I was placed third in the 2015 Lightship Prize for first time authors, won a 2016 Wishing Shelf Award Red Ribbon, been shortlisted at the UK Festival of Writing for Best First Chapter, long listed in the 2017 UK Novel Writing Competition.

In 2017, I was one of twelve authors selected for Authors in the Spotlight at the Bloody Scotland book festival in Stirling, showcasing who they considered to be the best emerging talent in crime fiction,and was the only self published author to be chosen. I have spoken at numerous other book events,including Blackwells' Writers at the Fringe at the Edinburgh Festival Fringe; a standalone slot at the Byres Road Book Festival in Glasgow, and the Aye Write! Book Festival, also in Glasgow.

I worked in Russia and Ukraine for ten years, which gave me the ideas for the plot and setting that I
used in A Friend in Deed. 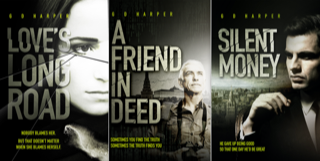 *Terms and Conditions – Worldwide entries welcome.Please enter using the Rafflecopter box below.The winner will be selected at random via Rafflecopter from all valid entries and will be notified by Twitter and/or email.If no response is received within 7 days then Rachel’s Random Resources reserves the right to select an alternative winner. Open to all entrants aged 18 orover. Any personal data given as part of the competition entry is used for this purpose only and will not be shared with third parties, with the exception of the winners’ information. This will passed tothe giveaway organiser and used only for fulfilment of the prize, after which time Rachel’s Random Resources will delete the data.I am not responsible for despatch or delivery of the prize.