✨✨ Delighted to host today's final stop on this Blog Tour ✨✨

If I have anything to do with it, we Howards will live forever.”

Thomas Howard is the charismatic head of one of the most powerful Houses in Tudor England. An indomitable old man approaching eighty: soldier, courtier, politician, a ‘phoenix’ rising from the ashes. After a calamitous period of disgrace, the Howards, renowned for their good looks and charm, are once more riding high at the court of Henry VIII.

Set against the backdrop of the extraordinary 1520 ‘Field of Cloth of Gold’, it is a tale of ambition, love, and intrigue, with Thomas at the centre of this intricate tapestry.

Will Thomas’s bold vow be fulfilled? Danger stalks the corridors of the royal courts of Europe. Uneasy lies the head beneath a crown. Every other ruler - a fickle bedfellow…or sworn enemy. The action takes place in England, Scotland, and France. On either side of the Narrow Sea, four young lives are interwoven, partly unaware of each other, and certainly oblivious to what Dame Fortune has in store for them.

“Nicolas de La Barre laid his lute to one side, hardly bothering to stifle a yawn of boredom. Nevertheless, he couldn’t escape the fact he’d agreed to take on a new wife….” Explosive family secrets are concealed behind the ancient walls of castles in three lands. But… “There are no secrets that time does not reveal.”


Thomas Howard is the formidable head of a family which has always been in the shadow of the English crown. However, whilst this was sometimes seen, by some, to be an enviable position, the Howard’s closeness to the crown, and their indomitable links with Tudor politics was so often filled with danger and intrigue.

In this intricately detailed historical novel we learn of the significance of the now infamous meeting in France, in June 1520, between Francis I and Henry VIII in the event known as The Field of the Cloth of Gold, and of the importance, not just of this meeting, but also of the important role that the Howard's played in British history.

The story isn't static and moves around with an ease which allows the fluidity of the story to reveal all of its many twists and turns. From the sumptuous meeting places of Henry VIII and Cardinal Wolsey, to the convoluted politics of Europe, A Phoenix Rising allows a glimpse into a period in history which was certainly alive with intrigue and brimming with dangerous malice. Interspersing real life historical figures alongside fictional characters works well and adds an interesting dynamic to the story. I enjoyed watching and getting to know more about Thomas Howard, he was such an intriguing elder statesman, filled with a deviousness which belies his strength as a politician, especially as he tries to keep one step ahead of those who, inevitably, seek to thwart his endeavours.

As this is book one in a proposed series the story ends with the indication that the story is far from finished, and it will be interesting so see where this talented author takes next in book #2 which is due in 2020 to mark the 500th anniversary of the Field of the Cloth of Gold. At the end of the novel there's a remarkably detailed glossary of sixteenth century words and terms which I found fascinating and which help to bring the period alive in a special way.

A Phoenix Rising is a commendable and beautifully researched historical novel which shines the spotlight on the Howard family in an original and intriguing way. 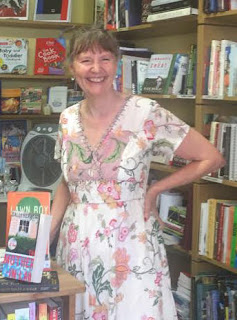 Born near historic Winchester in the UK, Vivienne Brereton has been passionate about the Tudors for as long as she can remember. This led to a degree in medieval history at university where she met her future husband. Three sons later and six countries she called home, she finally felt ready to write a novel.

Words have always played an important part in Vivienne’s life whether it’s been writing, editing, teaching English to foreigners, or just picking up a good book. In preparation for her novel, she read intensively on the skills needed to write well and did an enormous amount of research which she greatly enjoyed. Having three sons was helpful when she came to write about the characters, Tristan and Nicolas. All those squabbles she had to deal with came in very handy. She also used her husband and sons as guinea pigs for her Tudor cookery attempts with varying degrees of success (abuse).

Seeing ‘A Phoenix Rising’ in print for the first time was a moment of great joy for her and she hopes you enjoy reading it as much as she enjoyed writing it.

It is also available to order through bookshops everywhere. 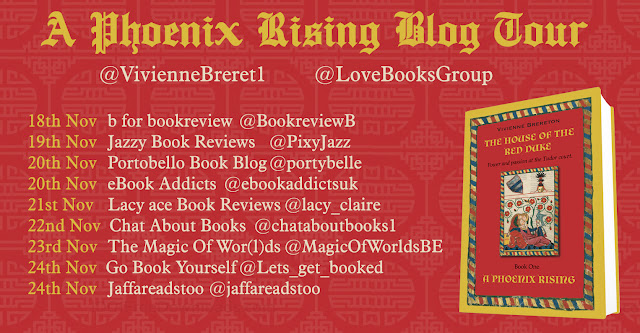