Blog Tour ~ The Guardian of Lies by Kate Furnivall


✴✴ Delighted to host today's stop on this exciting Blog Tour ✴✴

1953, the South of France. The fragile peace between the West and Soviet Russia hangs on a knife edge. And one family has been torn apart by secrets and conflicting allegiances.

Eloïse Caussade is a courageous young Frenchwoman, raised on a bull farm near Arles in the Camargue. She idolises her older brother, André, and when he leaves to become an Intelligence Officer working for the CIA in Paris to help protect France, she soon follows him. Having exchanged the strict confines of her father's farm for a life of freedom in Paris, her world comes alive. But everything changes when André is injured - a direct result of Eloise's actions. Unable to work, André returns to his father’s farm, but Eloïse’s sense of guilt and responsibility for his injuries sets her on the trail of the person who attempted to kill him. Eloïse finds her hometown in a state of unrest and conflict. Those who are angry at the construction of the American airbase nearby, with its lethal nuclear armaments, confront those who support it, and anger flares into violence, stirred up by Soviet agents. Throughout all this unrest, Eloïse is still relentlessly hunting down the man who betrayed her brother and his country, and she is learning to look at those she loves and at herself with different eyes. She no longer knows who she can trust. Who is working for Soviet Intelligence and who is not? And what side do her own family lie on?

The Guardian of Lies opens in 1953, and is a dramatic look at the events in Europe in the aftermath of the Second World War, when peace was a fragile commodity and the threads of the Cold War between Russia and the world were beginning to pull ever tighter. Eloïse Caussade and her brother, André, have a close relationship however, when Eloïse inadvertently gets caught up in the dangerous game her brother is playing as an intelligence officer in post-war France, it opens up a whole series of dramatic events. Eloïse is a strong and determined young woman who sets out to discover the secrets her family are keeping from her, even though it puts those she cares for in extreme danger.

Eloïse and her family have been guardians of this land in southern France for generations, farming the Camargue landscape along the banks of the River Rhône, but when an American airbase is placed adjacent to their land it causes great unrest in the nearby town of Arles, putting Eloïse, and her family, in grave peril.

The story gets off to an exciting start and this drama continues with a set of characters and events which bring the whole story to life in a remarkably authentic way. The author writes this type of strong historical fiction very well, and with The Guardian of Lies she has given us another beautifully researched story about a troubled time in our collective history. The mystery at the heart of the novel is filled with just the right amount of tension which allows the story to evolve gradually, and as those who are caught up in this deadly game of espionage get drawn deeper and deeper, so the pressure builds towards a dramatic conclusion.

The Guardian of Lies is published by Simon&Schuster in Ebook and Paperback and is out now.

Kate Furnivall was raised in Wales, went to university in London, and worked in advertising before becoming a bestselling writer. Her first historical novel, The Russian Concubine, was inspired by her grandmother’s real-life story – she fled the Russian Revolution and became a refugee. Kate has written ten novels since, including The Betrayal, and has been shortlisted for the RNA Historical Novel of the Year Award. She now lives in Devon with her husband. Her books are translated into over 20 languages and have been on the Sunday Times and New York Times Top Ten Bestseller lists. 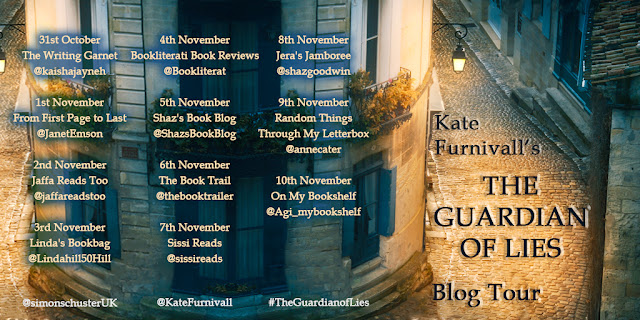