Review ~ Not Without Risk by Pete Trewin

Martin Bennett works behind the scenes for a regeneration company which is working on new ideas to bring prosperity back to Merseyside. Liverpool seems to be a place which is crying out for redevelopment, but, as Martin discovers, to his cost, that not everyone is of the same opinion.

Not Without Risk is a complex thriller which takes us on a lively journey through the sinister underworld of the city of Liverpool. It’s a place where all manner of shady individuals ply their trade, and thanks to a few bent coppers who turn a blind eye, they always seem to succeed in keeping one step ahead of the law. When Martin witnesses the suspicious death of an old adversary, he inadvertently gets drawn into this criminal netherworld, a world which is inhabited by unethical lawyers and equally corrupt politicians.

Trying to put together all of the pieces of this complicated jigsaw puzzle is what makes Not Without Risk such an entertaining read. I enjoyed getting to know Martin, he’s a likeable chap, and even though when we first meet him he’s slightly down on his luck, he rises to the challenges that the story throws at him with great aplomb. His lively banter with his colleague, Lester, and their thwarted efforts at getting fit made me laugh out loud, especially at the descriptions of Lester’s somewhat dubious sport attire.

I found much to enjoy in Not Without Risk, not just because I’m a northerner and could appreciate the dry wit and ready repartee which is so reminiscent of this part of the country, but also from the way the author really brings Merseyside, and in particular, Liverpool, to life in such a convincing and entertaining way.

Pete Trewin is the author of three crime mystery novels – with a touch of noir – set in Merseyside and the north of England. 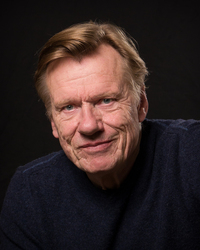