Blog Tour ~ Should You Ask Me by Marianne Kavanagh

I've come about the bodies. I know who they are.'

Just before D-Day in 1944, on the Isle of Purbeck in Dorset, an elderly woman walks into a police station. She has information, she says, about human remains recently discovered nearby.

The bodies could have stayed buried for ever - like the pain and passion that put them there. But Mary Holmes is finally ready to tell the truth.

The young constable sent to take her statement is still suffering from the injuries that ended his army career. As he tries to make sense of her tale, William finds himself increasingly distracted. Mary's confession forces his own violent memories to the surface - betrayals and regrets as badly healed as his war wounds.

Over six days, as pressure builds for the final push in Europe, two lives reveal their secrets. Should You Ask Me is a captivating story about people at their worst and best: raw, rich, and utterly compelling.

Mary Holmes has carried a deadly secret for the last sixty-two years and now, in 1944, with the country on the cusp of great change, she is ready to tell her story. In the local police station, William, is the young constable who is charged with listening to Mary's story, to discover, by Mary's own admission, what she knows about the discovery of human remains which have been found near to a local quarry. Over the course of the next six days, Mary tells her story, whilst at the same time allowing William, a deeply troubled young man, to reveal his own, deeply personal secrets.

Should You Ask Me is an absolute master class in story-telling, and whilst it is really two stories in one, both are beautifully reminiscent of the time in which they are set. Mary's life certainly hasn't been easy but she has emerged, in her eighty-sixth year, as a lively and determined woman, filled with the common sense that comes with great age, and with a unique ability to tell a good story, whilst at the same allowing the listener the luxury of their own emotional response. William’s personal problems are palpable, and as the sad fragments of his life are gradually revealed, so his sad story of loss, heartbreak and overwhelming guilt starts to emerge.

I read Should You Ask Me in one sitting as it’s one of those novels which, once started, is difficult to put down, and that’s not because it’s an action packed adventure, but because it’s a beautifully written story about two characters who each have a challenging and worthwhile story to tell.

Marianne Kavanagh has worked for Woman, the Tatler, the Sunday Telegraph magazine and British Marie Claire, and has contributed features to a wide variety of newspapers, magazines and websites, including the Telegraph, the Guardian, the Daily Mail, Woman & Home, Good Housekeeping, Easy Living, Red and My Daily. She lives in London. 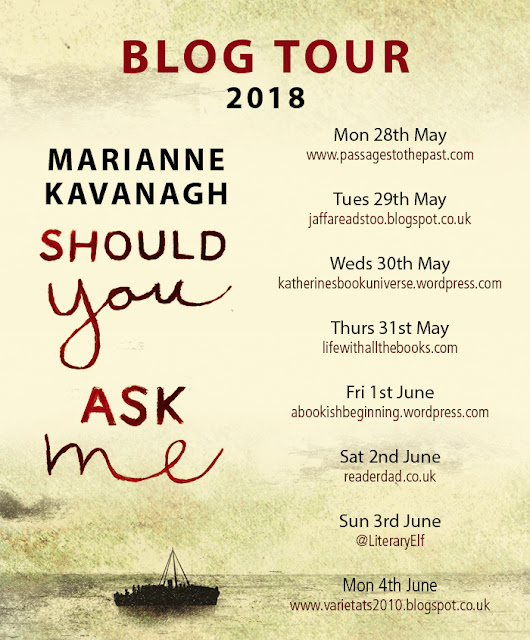