Lydia heard the distant ‑ flap of paper wings as the first book fell from its shelf. She glanced up from the register, head tilted, and imagined that a sparrow had ‑ own through an open window again and was circling the store’s airy upper floors, trying to find its way out.

A few seconds later another book fell. This time it thudded more than flapped, and she was sure it wasn’t a bird.

It was just past midnight, the bookstore was closing, and the final customers were checking out. Lydia was alone at the register, scanning a stack of paperback parenting books being bought by a teenage girl with pitted cheeks and peeling lips. The girl paid in cash and Lydia smiled at her but didn’t say anything, didn’t ask what the girl was doing alone at a bookstore this late on a Friday night, didn’t ask when she was due. When the girl got her change, she met Lydia’s eyes for a moment, then rushed out without any bookmarks.

Another book fell, definitely somewhere upstairs. One of Lydia’s comrades, a balding guy named Ernest who walked like a Muppet but always looked sad, was standing by the front door, guiding the night’s final customers into Lower Downtown.

“Are you hearing that?” Lydia said from across the store, but her voice was too quiet and anyway Ernest was occupied. She watched him unlock the door he’d just locked to let in a clubbing couple who looked drunk.

“They need to pee,” Ernest said, shrugging in Lydia’s direction. Outside, a few scru­ffy Book Frogs lingered on the flagstone sidewalk, zipping up backpacks and du­ffels, drinking from gallon jugs of water they’d refilled in the bathroom. One had a pulp crime paperback crammed in his back pocket. Another had a pencil on a string tied to his belt loop. They stood together but none of them spoke, and one by one they slumped separately into the city, off­ to sleep in a run-down basement in Capitol Hill, or on a bench in Union Station, or in the sticky cold of Denver’s alleys.

Lydia heard another faint flapping. Definitely a falling book, followed by a few more in rapid succession: ­ flap-flap­-flap. The store was otherwise quiet.

“Upstairs empty?” she said to Ernest.

“Just Joey,” Ernest said, but his eyes were fixed on the corner of zines and pamphlets that flanked the bathrooms where the drunk couple had just disappeared. “Do you think they’re screwing in there?”

“Joey?” he said. “You never know what Joey knows. He asked after you earlier, by the way. It may have been the longest conversation we’ve ever had.

Most days Lydia made a point of tracking Joey down wherever he’d settled into the store—a corner table in the co­ffee shop, or the former church pew in the Spirituality section, or even under the Story Tree in Kids—to see what he was reading and how he was feeling and whether any odd jobs had come his way.

She had a soft spot for the guy. But tonight she’d gotten caught in the store’s after-dinner rush and never tracked him down.

“Lyle is with him, right?” Lydia said. Though decade’s apart in age, Joey and Lyle were all but inseparable, like two halves of one smart and awkward beast.

“No Lyle. Not tonight. Last I saw, Joey was all alone in History.

He had masking tape on his fingers.”

“I think he must’ve cut himself or burned himself. Made bandages with Kleenex and tape.” He looked at his watch. “He’s not a crackhead, is he? They’re always burning fingers.”

Lydia heard another fluttering book. The store occupied three cavernous floors, and when it was quiet like this, sound traveled between them as if through an atrium. She imagined Joey all alone lobbing books up there, some kind of bibliomancy or I Ching toss. She’d be the one to stay late and reshelve them.

“Count the drawer for me?”

“Goddamned couple,” Ernest said, coming around to the register without unpeeling his eyes from the bathrooms. “They’ve gotta be screwing in there.”

Lydia crossed the store’s gritty floors and headed up the wide, tiered staircase that reached through the building like a fattened spine. Ernest had gone through earlier and turned o­ff most of the overhead lights upstairs, so she felt as if she were climbing into an attic.

The second floor was quiet, shelf upon shelf of books standing still. She continued to the third.

Joey was the youngest of the Book Frogs, and by far Lydia’s favorite. This wouldn’t be the first time that she or one of her bookselling comrades had done a final sweep at closing and found Joey knocking books off­ the shelves, searching for a title that may or may not have actually existed. His glossy hair would be draped over his eyes, and he’d be wearing black jeans and a black knit sweater with the collar just low enough to see the top of his tattooed chest. The wooden floors around his feet would be spread with books about subjects as far-reaching as his thoughts: Sasquatch sightings and the Federal Reserve, Masonic rites and chaos theory. He was a shattered young man, Lydia often thought, haunted but harmless—a dust bunny blowing through the corners of the store.

She liked having him around.

The third floor was dim and peaceful. Lydia stepped into familiar warren of tall wooden shelves and followed their angles and branches into di­fferent alcoves and sections, each holding chair or a couch, a table or a bench: Psychology, Self-Help, Religion, Travel, History.

When she stepped into the Western History alcove, she could feel her eyes trying to shut out what she was seeing: Joey, hovering in the air, swinging like a pendulum. A long ratcheted strap was threaded over a ceiling beam and looped around his neck. Lydia’s body sprung with terror, but instead of running away she was suddenly running toward him, toward Joey, and hugging his lanky legs and trying to hoist him up. She heard someone’s scream curdle through the store and realized it was her own.

Lydia’s cheek pressed into Joey’s thigh and his jeans were warm with urine. A lump in his pocket smelled of chocolate and she assumed it was a knot of melted Kisses, swiped from the bowl on the co­ffee shop counter. His hands were clenched into quiet fists and she could see the masking-tape bandages on three or four of hisfingertips, but she wouldn’t look up again at the popped purple sockets of his eyes, nor the foamy saliva rolling down his chin, nor the blue swelling of his lips.

She could see the cemetery of books that had flapped to the floor as Joey had climbed the shelves, and the others he’d shoved aside to create footholds as he threaded the strap through the ceiling, and still others that had dropped as he’d tried to kick his feet back to stop himself from dying. By now she’d locked her hands together on the far side of his thighs and was trying to lift him up, but her sneakers kept slipping on the wooden floor, and each time she slipped the ratcheted strap cinched tighter around his neck. She must have stopped screaming because a ringing silence suddenly swallowed everything when she saw, a few inches from her face, poking up from Joey’s front pocket, a folded photograph of her.

I read and reviewed Midnight at the Bright Ideas Book Store when it was published in hardback last year. You can read my review by clicking here

Lydia Smith lives her life hiding in plain sight. A clerk at the Bright Ideas Bookstore, she keeps a meticulously crafted existence among her beloved books, eccentric colleagues, and the BookFrogs—the lost and lonely regulars who spend every day marauding the store’s overwhelmed shelves. But when Joey Molina, a young, beguiling BookFrog, kills himself in the bookstore, Lydia’s life comes unglued. Always Joey’s favourite bookseller, Lydia has inherited his meagre worldly possessions. Trinkets and books; the detritus of a lonely man. But when Lydia flips through his books she finds them defaced in ways both disturbing and inexplicable. They reveal the psyche of a young man on the verge of an emotional reckoning. And they seem to contain a hidden message. What did Joey know? And what does it have to do with Lydia? As Lydia untangles the mystery of Joey’s suicide, she unearths a long-buried memory from her own violent childhood. Details from that one bloody night begin to circle back. Her distant father returns to the fold, along with an obsessive local cop, and the Hammerman, a murderer who came into Lydia’s life long ago and, as she soon discovers, never completely left.

Matthew Sullivan grew up in a family of eight spirited children in suburban Denver, Colorado. In addition to working for years at Tattered Cover Book Store in Denver and at Brookline Booksmith in Boston, he has taught writing and literature at colleges in Boston, Idaho and Poland, and currently teaches writing, literature and film at Big Bend Community College in the high desert of Washington State. He is married to a librarian and has two children and a scruffy dog named Ernie. 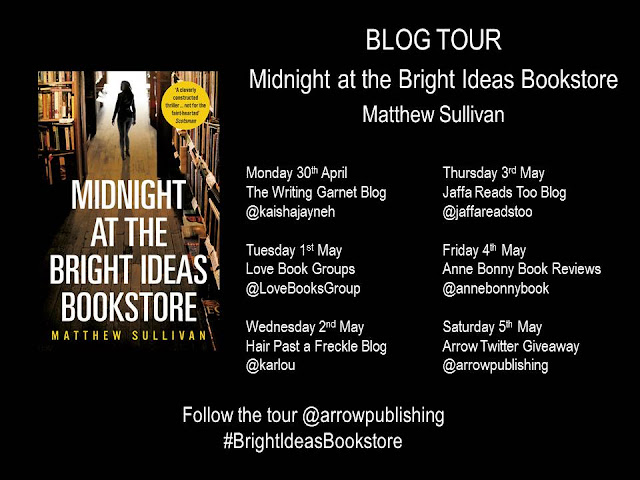